From Zelda Dungeon Wiki
Jump to navigation Jump to search
Want an adless experience? Log in or Create an account.
Laverra Beach 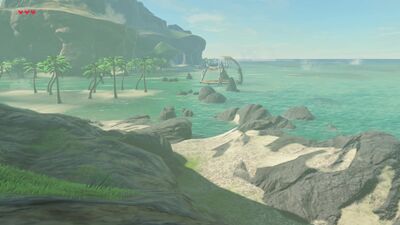 Laverra Beach is a location found in Breath of the Wild.

The Laverra Beach is located at the south end of the Lake Tower region, found right where the Menoat River spills into the Faron Sea. Along the beach, there are Ironshell Crabs, Razorclaw Crabs, and Hearty Blueshell Snails that will appear. There is also some wildlife in the area, with Mountain Goats on the other higher ledges, along with Pink Heron and Blue-Winged Heron that occasionally appear.

Within the water itself, Armored Porgy and Mighty Porgy are found, usually in small groups of two or three. However, out on the sea, there are some dangerous Blue Lizalfos as well as some Water Octoroks that appear. A bit out to the east there is a small camp that has a Green Lizalfos, as well as a pair of Blue Lizalfos. There is a wooden treasure chest at there small stronghold that contains five Shock Arrows. There are some wooden creates at the stronghold as well that hold some Apples and Palm Fruits.

The steep cliffs up the north lead towards the Darybon Plains. Along the cliffs, there are some Luminous Ore Deposits, as well as a handfull of Rushrooms. 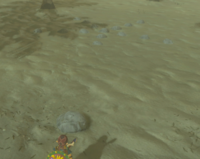 Complete the star-shaped stone pattern with a nearby rock.

One rock is slightly out of place. Correct the pattern. 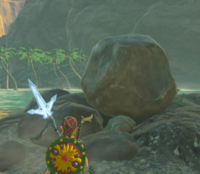 Roll this boulder away and then lift the uncovered rock.

One rock was not enough for this Korok, it had to hide under two. Remove the boulder (using Stasis or an Octo Balloon) and pick up the rock under it. 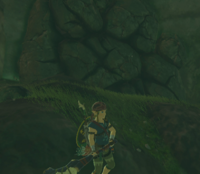 Bomb the wall and lift the hidden rock.

Blow up the boulders, pick up the rock underneath. 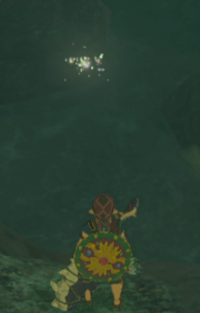 Climb the palm tree and examine the fairy lights.

Climb the tree and examine the fairy lights.

Drop one cliff level down from the top of the cliff to find a rock to pick up.