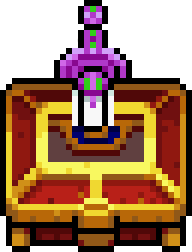 At the beginning of The Minish Cap, Minister Potho explains to Link that the winner of the annual sword fighting contest of the Picori Festival is granted the honor of touching the Picori Blade that is sealing the Bound Chest.[3] The champion of this year is Vaati.[4] However, it quickly becomes clear that Vaati intends to open the Bound Chest in search of the Light Force.[5] Though the guards try to fight him off, he successfully breaks the Picori Blade and unleashes all of the monsters within.[6] However, the Light Force is not inside, so Vaati leaves, allowing the monsters to continue wreaking havoc on Hyrule.[7]