From Zelda Dungeon Wiki
Jump to navigation Jump to search
Want an adless experience? Log in or Create an account.
Sinking Ships 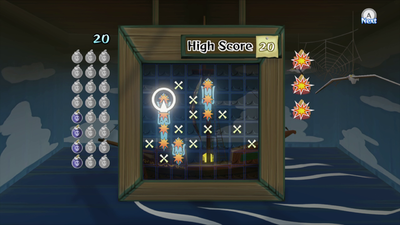 Sinking Ships is a mini-game found in The Wind Waker. This mini-game is found on Windfall Island and hosted by Salvatore. It closely resembles the board game Battleship.

The objective of the game is to sink three different sized squid pods that are hidden on the 8x8 playing board with a maximum of 24 cannons. For every wrong guess, an "X" appears on that space of the board and for every hit, an orange star-shaped mark appears. If Link is successful and wins the game by finding all three squid pods, Salvatore offers Link a Piece of Heart as his prize the first time. If Link plays again and beats the game using less than 20 cannons, Salvatore will give Link a Treasure Chart with which another Piece of Heart can be obtained by following the spot marked on the chart to Diamond Steppe Island. If Link beats the game a third time by beating his previous high score, another Treasure Chart can be won with which 200 Rupees can be found the same way by Star Island.

The game is entirely luck-based as the positions of the squid are always randomised. As the third Treasure Chart requires beating your own record, it is recommended to try and waste as many turns on your first two attempts, as the game will not give you the Treasure Chart for beating your own high score before you have obtained the first two. If you are stuck, there is a community tool which can help you narrow down the likely location of the squid for each randomly generated board.