Digdogger (The Legend of Zelda)

From Zelda Dungeon Wiki
Jump to navigation Jump to search
Want an adless experience? Log in or Create an account.
Digdogger 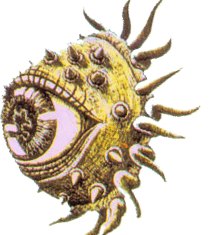 Official Artwork from the The Legend of Zelda Instruction Booklet

In Level 5: The Lizard, before engaging in this fight against Digdogger, Link can meet up with the Old Man in a certain room located in this dungeon. Here, the Old Man will tell Link the secret to defeating the Digdogger. He says, "DIGDOGGER HATES CERTAIN KIND OF SOUND."[1] Link can use this information by using the Recorder during the fight against Digdogger which will cause it to break into a mini-Digdogger. This mini-Digdogger can be defeated with a multitude of items such as the Sword, Bombs, the Bow and Arrow, or the Magical Rod. The best item to attack the Digdogger with are the Bombs and the Magical Sword, both taking two hits to defeat the mini-Digdogger. After defeating Digdogger, Link is rewarded with a Heart Container and the fifth Triforce fragment.

A trick to defeating Digdogger quickly is to place a bomb on the large Digdogger, and then blow the Whistle. If timed correctly, this will hit the small Digdoggers and deal damage. Another bomb can be quickly placed as well to hit the remaining enemies.

Before using the Whistle, place a bomb on big Digdogger, and then blow the whistle. This guarantees that you will hit the small Digdogger(s) if you do it right. Right after you blow the whistle, quickly drop another bomb for more damage. Overall, Digdogger is extremely easy.

Digdogger makes its second and last appearance as the mini-boss of Level 7: The Demon. Link will fight Digdogger a total of three times in this dungeon. The first battle is exactly the same as the one from Level 5. However, the final two are slightly different. After Link plays the Recorder, Digdogger will not split into one mini-Digdogger like before. Instead, it will split into three mini-Digdoggers. Link must use the same strategy as before to defeat all three Digdoggers in order to reach new parts of the dungeon.

Digdogger appears twice during this dungeon, once in a room immediately north of the entrance, and again as the boss guarding the Triforce Shard. In the first room, Digdogger is defended by two fireball-shooting Stone Statues in the middle of the room, and the door to the rest of the dungeon will not open until Digdogger is defeated. Much like in the Demon, playing the Recorder will cause the Digdogger to split into three mini-Digdoggers that must all be defeated. In the room before the Triforce Shard, Digdogger reappears with four fireball-shooting Stone Statues, one in each corner of the room. After defeating all three mini-Digdoggers again, the Triforce Shard is free for Link to claim.

Two more Digdoggers appear during the eighth level of the Second Quest, however, Link can skip fighting both of them if he so wishes. Both Digdogger will split into three mini-Digdoggers if the Recorder is played, however, only the second one is joined by Stone Statues, so the first one can only harm Link with contact damage. If Link does not have the Food, he will have to defeat the first Digdogger and take a shortcut to the end of the level. If Link uses the Food on the hungry Goriya to proceed deeper into the dungeon, he will soon be locked in a room with the last Digdogger in the game. Link can elect to fight the Digdogger and leave the room, or he can simply bomb his way into the next room and keep moving on toward the Magical Key.