Aquamentus (The Legend of Zelda)

From Zelda Dungeon Wiki
Jump to navigation Jump to search
Want an adless experience? Log in or Create an account.
Aquamentus 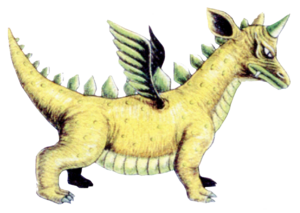 Aquamentus is the first Boss in The Legend of Zelda. It is encountered in Level 1: The Eagle and Level 7: The Demon as the final boss of both dungeons. It is a creature that appears to be a mix of a unicorn and a dragon, as it has a horn on its head (unicorn) and it spits out fire and has wings (dragon).

Aquamentus is first encountered as the final boss of Level 1: The Eagle. It is there guarding the first Triforce Shard, which Link needs in order to reconstruct the Triforce of Wisdom. Aquamentus' main attack is to shoot three fireballs at Link at once, each going in a different direction. If one of these hits Link, it causes half a heart of damage. Also, making contact with Aquamentus results in Link losing half a heart of health.

The best method of attack against Aquamentus is to avoid the fireballs and attack its body when it's not shooting fireballs. At this stage of the game, it is possible to already have the White Sword, which kills Aqaumentus in three hits. If Link has not collected the White Sword yet, the original Sword does just fine, killing Aquamentus is six hits. Bombs can also be used and will damage the monster anywhere on its body. The Bow & Arrow can be used as well, and will do as much damage as the White Sword.

In Level 7: The Demon, Aquamentus makes its second appearance as the guardian of the seventh Triforce Shard. The Level 7 version of Aquamentus is exactly the same as the Level 1 boss, meaning all of its attacks damage the same, and it requires the same amount of damage to defeat. If Link has collected the Magical Sword at this point, which is more than possible, he is able to kill Aquamentus with only two hits. After Link has defeated Aquamentus, he can collect the Triforce Shard, and continue his quest.

In the Second Quest, Aquamentus is again the final boss of Level 1. It behaves the exact same way as in the First Quest. However, the path to it is more dangerous this time around, and it is less likely that Link has the White Sword, Bow, or Blue Ring when facing it in this dungeon, meaning it may pose a bit more of a challenge.

In Level 4, Aquamentus is found in an optional room of the dungeon, guarding the room holding the Book of Magic and an alternate path to an Old Man location where Link can purchase an increase to his maximum bomb capacity.

Aquamentus is found for the last time in the penultimate dungeon of the Second Quest, Level 8. It is again in an optional room, only accessible by Link bombing his way south near the end of the level. As it appears so late in the game, Link should have enough items and hearts to effortlessly defeat it, unlocking a path towards another Old Man selling bombs.