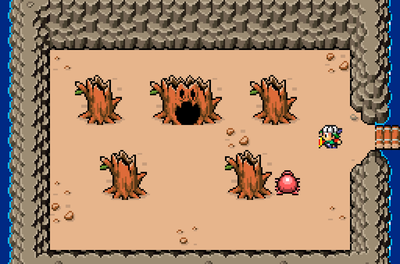 After receiving the Wooden Sword from the Old Man, the avatar heads north through Lesser Hyrule to search for the first Triforce Shard. Heading east of the Starting Screen, the avatar goes north two times before traveling west once. Navigating north, the avatar finally arrives at the first dungeon after going west, being guarded by a single Octorok.

Nearby, a wall can be bombed for a secret cavern. Inside, the avatar can receive a total of 45 Rupees.

Level 1 is a very straight forward and simplistic dungeon. Most of the enemies that the avatar encounters are very basic, capable of being defeated with just a few sword slashes. Unlike the rest of the dungeons, the avatar does not need any items besides the Wooden Sword to complete Level 1. Since it is the first dungeon in the game, there are barely any puzzles, them being very simplistic. In one room, the avatar has to push one block that is located in the center in order to unlock a door. Similarly, they have to push the western-most block in order to access the stairs to a side-scrolling section of the dungeon.

There is only one item that the avatar can obtain in Level 1. This item is the Bow, which can be found in a side-scrolling section of the dungeon. This side-scrolling area can be accessed from a staircase in the room that is in the middle of the dungeon. Guarded by Keese, the avatar can make their way to obtain the Bow. However, it cannot be used until they have bought the Arrows from any of the shops around Hyrule. The price for these Arrows is 80 Rupees. After the avatar has purchased the Arrows, every time they shoot one, they lose one Rupee.

An Old Man can be found in this dungeon, in the room west of the entrance of the dungeon. Once the avatar enters the room, the Old Man gives advice on how Arrows cost Rupees to use.[1] This explains how the avatar can use the Bow and hints to what the dungeon item is.

The Compass is used to show the avatar the location of the Triforce Shard, which is represented by a flashing, red circle on the avatar's map. It is found in the room next to the entrance of Level 1, being directly west of it. Inside this room, there are five Keese that can be encountered. The avatar can choose to defeat these enemies in combat or just run past them and obtain the Compass.

Inside level 1, there are a total of five Small Keys that are scattered throughout the dungeon. Two of these keys can be found by defeating a specific Stalfos which is holding onto a key while another key can be found by defeating all the enemies in a specific room. Lastly, the avatar does not need to do anything to obtain the last two keys. Using these keys, they can unlock each and every one of the five Locked Doors that are found in the dungeon.

BS The Legend of Zelda Dungeons[edit][hide][show]
Retrieved from "https://www.zeldadungeon.net/wiki/index.php?title=Level_1_(BS_The_Legend_of_Zelda_MAP_1)&oldid=346338"
Categories: