From Zelda Dungeon Wiki
Jump to navigation Jump to search
Want an adless experience? Log in or Create an account.
Hero's Trial 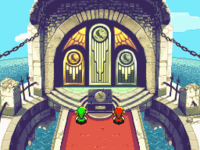 Entrance to the Hero's Trial

The Hero's Trial is an optional stage, included in Four Swords Anniversary Edition. It becomes unlocked after you collect 30,000 rupees. It has three doors, only the first being open when you unlock it; to open the others you must complete the previous ones. It is filled with much more numerous enemies than usual stages, and is indeed a Trial. As in the Realm of Memories, there is no boss, but rather three floors of puzzles and enemies.

After completing the Hero's Trial, Link obtains the Hurricane Spin. This feature can be used when playing in either solo or multiplayer.