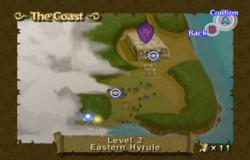 Eastern Hyrule is the second level featured in Four Swords Adventures. The Links arrive here after completing the first level, Whereabouts of the Wind. They are brought to the first stage in the level, The Coast, by the Blue Maiden.

After passing through the coast and defeating the stage boss Manhandla, they reach the second stage, the Village of the Blue Maiden. The Links arrive to find the residents upset due to disappearing children and the arrival of the Mages. By traveling back and forth between the Dark World and the Light World they bring peace back to the Village, and later defeat more Shadow Links just outside the Village.