This article is about the location. For the Age of Calamity Chapter 7 scenario, see The Great Plateau.

The Great Plateau is the starting area of Breath of the Wild. The area is a large expanse that covers various different terrains as well as being raised above the ground level of the rest of the world. It contains the Shrine of Resurrection where Link first awakens and the Great Plateau Tower. Since the Great Plateau is surrounded by high cliffs, Link is unable to leave the area until he acquires the Paraglider from the Old Man.

The northeast half of the plateau is a temperate area with various woods and ponds. It features the ruins of the Temple of Time and its surrounding buildings, as well as traces of cobblestone pathways on its northeast area and the ruins of the Eastern Abbey. The only habitable building is the Old Man's hut on the southeast of the lower plateau. The Temple of Time is surrounded by the inert husks of attacking Guardians.

On the northeast, between the Great Plateau Tower and the Oman Au Shrine there's a small, long lake that ends on the walls of the plateau. It's assumed that this was the entrance to the plateau, which was plugged shut with rocks and subsequently flooded, and that as such, the enemies found in the plateau are remnants that were left stranded in it. It's not known under what circumstances this happened, or how the battle in the plateau transpired.

The southwest half of the plateau is cold and snowy, featuring an extreme change in weather in spite of the negligible difference in altitude compared to the rest of the plateau, especially the area behind the Shrine of Resurrection. Its main geographical features are the frigid River of the Dead and Mount Hylia, the latter whose summit is marked by a pileup of rocks assumed to be the tomb of King Rhoam.

The area's main enemies are Bokoblins, though there are Decayed Guardians in the Eastern Abbey ruins, as well as a Stone Talus in the Forest of Spirits. There are no Lizalfos or Moblins in the plateau, though some are shown in The Champions' Ballad DLC. Stalkoblins are a common threat at night.

In Master Mode, there's a White-Maned Lynel southeast of the Temple of Time. 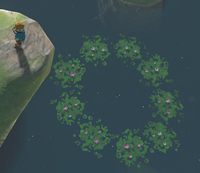 Jump from the promontory into the circle of lilies.

Perhaps the first Korok Seed that can be acquired in the game is available just downhill from the Shrine of Resurrection. There will be a small pond on the right, with an island in the middle with a sword on top. A small promontory juts out towards the island, and if you look immediately below, you will see a ring of lilies making a perfect circle in the water. Jump from where the cliff juts out directly into that circle to get the Korok Seed.

Obtainable from the start


Obtainable after having left the Plateau

Breath of the Wild Key Locations[edit][hide][show]
Retrieved from "https://www.zeldadungeon.net/wiki/index.php?title=Great_Plateau&oldid=414930"
Categories: