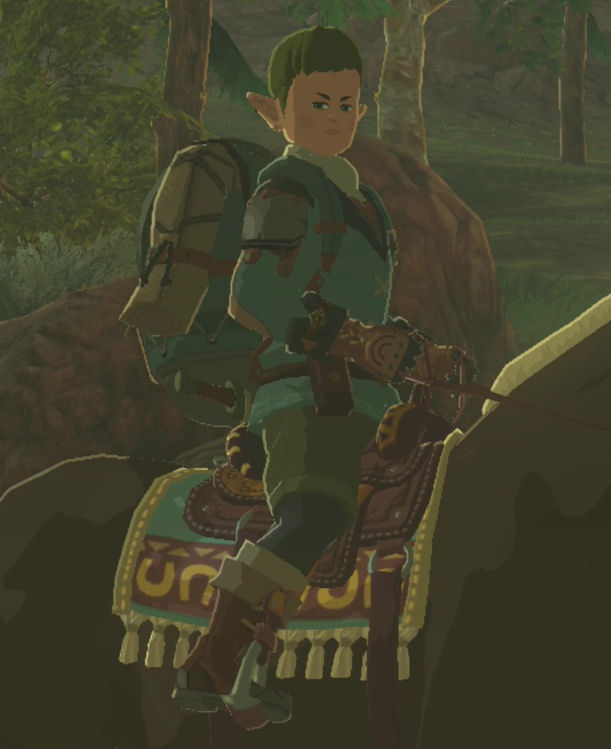 Pitar is a character from Breath of the Wild.

Pitar is a traveler who can be seen riding his horse between the South Akkala Stable and the East Akkala Stable. He will stop and rest at each time he reaches on the stables, before then turning around and riding back. He carries an Emblazoned Shield on his back to defend himself against any enemies he encounters.

Pitar has general knowledge of all the happenings within the Akkala region. He has heard about the Spring of Power, but he's never actually been there. The rumors are that there is a mystical force at the spring that repels anyone that tries to take a dip, although he's not sure, as maybe the force strengthens you instead.[1] He likely heard this rumor from Nobo, a Hylian who stays at the East Akkala Stable. Pitar mentions that Nobo had given him some good information.[2] When Link speaks with Nobo, this opens up the shrine quest titled, The Spring of Power, which leads Link to the spring.

He wonders out loud as to what the total population is of the Akkala region, although he doesn't seem to know himself.[3] He does know that the Akkala region is known for their powerful Ancient Arrow technology. He tells Link that those arrows are so powerful, they can take down a Guardian with a single shot.[4][5]

Pitar will repeatedly mention Stamm, a traveling chef who can be found traveling between South Akkala Stable and Tarrey Town. While Pitar has heard about Stamm, he has never crosses path with hims. This is likely due to the fact that while they both do travel to the South Akkala Stable, there actually paths diverge from there, with Pitar traveling north, and Stamm traveling east.[6][7]

Pitar even has knowledge of the Lomei Labyrinth Island ruins to the northeast. Although he states that he'd never wander into that area, as due to his lousy sense of direction, he'd be lost for days.[8]

He will also talk about the Akkala Ancient Tech Lab. He mentions that Robbie, the director of the tech lab reports to Purah, the director over at the Hateno Ancient Tech Lab.[9] However, Pitar has some wrong information, as he heard that a girl named Cherry is a great cook. In fact, Cherry is a robot at the tech lab who can be given Ancient Materials to create Ancient Weapons and the Ancient Set of armor.[10]

Pitar will also talk about Kilton's shop, the Fang and Bone, mentioning that it only opens up at nighttime over at Skull Lake. However, Pitar doesn't seem to know exactly where Skull Lake is located.[11]