From Zelda Dungeon Wiki
Jump to navigation Jump to search
Want an adless experience? Log in or Create an account.
Ja Baij Shrine 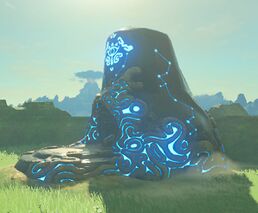 Ja Baij Shrine, also known as the Bomb Trial, is one of the many Shrine of Trials from Breath of the Wild.

The Ja Baij Shrine is located at the Eastern Abbey directly east from the Breath of the Wild. The area is guarded by several stationary Guardians with the entrance in front of the shrine blocked off by some boulders. Link can enter the shrine and avoid the Guardians by climbing up the nearby walls. Alternatively, Link can stand in front of the boulders, allowing the Guardian to target him. At the last moment, Link can move out of the way and the guardian will shoot the boulders with his laser.

At the nearby pedestal, acquire the Remote Bomb Rune. This actually consists of two runes, a spherical bomb and a cubical bomb.

Use the bombs to blow up the blocks in front of you. You can then turn to the right to find some more blocks that have a treasure chest behind it. Blow them up and you'll find a Traveler's Claymore in the treasure chest. On the left side there is another set of blocks, so blow those up as well.

In the next room jump on the moving platform and drop a cubic bomb. Then jump away and detonate the bomb when it is near the blocks, opening the pathway forward. (There's other ways to do this as well.)

In this wide open area, you can use the launcher on the far left to launch to the treasure chest that contains an Amber. The Ancient Orb being thrown by the middle launchers only serves illustrative purposes, and has no function in the shrine otherwise. On the right side there is another launcher, with a small hole where you can drop a spherical bomb. Do so and the bomb will be launched across. Detonate it to blow up the blocks.

Climb the ladder and head to the altar to find Ja Baij. He will reward Link with a Spirit Orb.