This article is about the character and boss. For the game, see The Legend of Zelda: Majora's Mask. 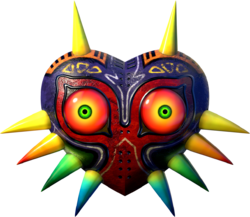 Majora's Mask is a powerful and evil mask. Skull Kid steals it from the Happy Mask Salesman, and its power overcomes him. Once used in hexing rituals by an ancient tribe, the mask contains a seemingly sentient being that seeks to bring the Moon down on Termina in the events of the game Majora's Mask.[1] However, little else is known about the mask. It is also not known where and how the Happy Mask Salesman acquired the mask.

"According to legend... the troubles caused by Majora's Mask were so great... the ancient ones, fearing such catastrophe, sealed the mask in shadow forever, preventing its misuse."

Link learns about Majora's Mask's history only after retrieving the Ocarina of Time and learning the Song of Healing from the Happy Mask Salesman. According to the Happy Mask Salesman, the mask is a powerful and ancient artifact that was once used in hexing rituals by an unknown Ancient Tribe.[2] Its evil power is granted to anyone who wears the mask.[3] However, the troubles it caused were so great that the ancient ones decided to seal it away in fear.[4] Very little else is known because the tribe vanished.[5]

"I went to great lengths to get that legendary mask. When I finally had it... I could sense the doom of a dark omen brewing. It was that unwelcome feeling that makes your hair stand on end. And now... that imp has it..."

Once Skull Kid puts on the mask, his pranks slowly became worse and the power of the mask overtakes, and begins to possess him.[9][10] Under its sway, he sets the Moon on a course to hit Termina and destroy it. Eventually, after Link and Tatl summon the Four Giants to stop the Moon's fall, Majora's Mask abandons Skull Kid, claiming that he was too weak to wield its power and is no longer useful.[11][12] The mask escapes Inside the Moon, forcing Link and Tatl to follow him there and battle the mask's evil spirit.[13]

After Link defeats Majora, the evil leaves the mask, allowing the Happy Mask Salesman to reclaim it once more.[14][15]

As the mask's original representation, this form is seen for the whole game except the very end, when Majora switches to other forms. It is a purple mask with two big yellow eyes and spikes on the side of the mask. It is also the first stage of the boss battle. The mask literally floats in mid-air, but can be easily defeated with the Fierce Deity's Mask. His attacks include spinning sideways towards Link like a saw-blade and shooting a fire beam that can be reflected. He summons the bosses' remains to attack the hero, but they are weak and can be defeated quickly.

This form is only seen during the boss battle. Majora grows a pair of legs and arms. This form is very bizarre since Majora acts feminine and makes strange noises at the same time. It really shows you just how psychotic the demon is. Majora runs around in circles and fires energy balls at Link. The best way to deal with him is to use the Fierce Deity's Mask. However, other alternatives exist, such as Zora Mask, Great Fairy's Sword, etc.

This is the final form of Majora. It too is only seen during the boss battle. After the Incarnation is defeated, Majora grows more muscle, and a demon-like head and tentacles that he uses like whips.

"An eerie mask passed down from ancient times. Wearing it makes it harder for certain enemies to spot you. It's a rather rare find."

The mask makes a reappearance in the first open-world Zelda game. It has a base defense of 1, and was released as a part of the first DLC expansion for the game: 'The Master Trials'. Its disguise ability can be used to set up devastating attacks or avoid some combat entirely.

Majora's Mask combines the disguise functionalities of the monster masks sold by Kilton, the Radiant Set and the Phantom Ganon Set. In other words, Link can use it to hide among Bokoblins, Moblins, Lizalfos, Stalkoblins, Stalmoblins, Stalizalfos, and Lynels. The disguise effect is described in the item description, but is not specially noted on the Inventory screen the way a Set Bonus is.

This piece of armor can be found at the Kolomo Garrison Ruins in the southern part of the Central Tower regional map. Be sure to check our Interactive Map for a more precise location.

After Link has obtained this item for the first time, he will be able to repurchase it from Granté in Tarrey Town for 50 Rupees. 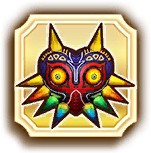 Majora's Mask is also the gold (super-rare) material dropped by Skull Kid. This can be used to create badges in the Badge Market and mixtures in the Apothecary as a gold material. Badges that the material creates vary based on the character being upgraded.