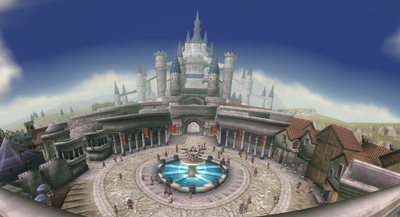 Castle Town (also known as Hyrule Castle Town in Ocarina of Time and Hyrule Town in The Minish Cap) is a recurring town in The Legend of Zelda series. This is one of the main towns in most Zelda games. The northernmost exit always leads to Hyrule Castle.

In Ocarina of Time, Hyrule Castle Town is found to the north of Hyrule Field, and is sectioned off from the Field by a drawbridge, which closes at night.

The Hyrule Castle Town Market is the center of mini-games and shops while Link is a child; seven years into the future, Hyrule Castle Town is destroyed and most businesses have moved to Kakariko Village. The town is extremely lively, with many inhabitants, and there is a large fountain in the center. The Temple of Time lies in the north-east, while there is also a Back Alley to the west with the Bombchu Shop and residences. Several other streets can be seen from a distance but not entered.

It is a destroyed ruin in the future, with the Back Alley blocked by debris, populated only by ReDeads.

Hyrule Town is once again a bustling town with many businesses in The Minish Cap, most of which open later in the game. It is also the place of the Picori Festival and home to the Town Picori. Many pivotal kinstone matches are with the residents of Hyrule Town, making almost every visit Link makes full of opportunity. Despite the fact that in the beginning of the game many buildings are closed or have yet to be built and a handful of merchants are missing, Link can match his way to a thriving metropolis and eventually gain access to every area as both his full and Minish-sized self.

This area is also home to a few secrets, including the Power Bracelets, making it a beneficial area to explore thoroughly and often.

The incarnation of Castle Town in Twilight Princess is found in the Lanayru Province and is much larger than before. This time is features four main areas: Castle Town South Road, Castle Town West Road, Castle Town East Road, and Castle Town Central Square. People and knights are always seen walking through the town. Castle Town is where Link first finds Ilia after she was captured by Bulblins.

Castle Town in Spirit Tracks is in the north of the Forest Realm. Link first goes here in order to receive his Engineer Certificate from Princess Zelda. Castle Town is surrounded by large stone walls and in a rectangular shape, with buildings located all around.