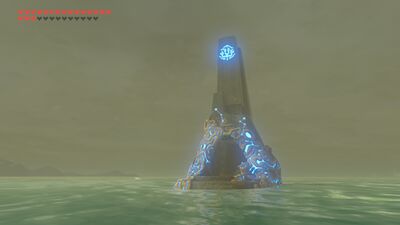 Your best bet is to wait at the east end of Knuckel Island and create a camp fire. Sit until morning and it will be 5am. This should give you enough time to paraglide over and drop down into the blue circle. Successfully doing so will cause the Kee Dafunia Shrine to appear.

Keep in mind that, while the archipelago Knuckel Island belongs to is inside the Lanayru Tower region, Ulria Grotto is not, as it belongs to the Akkala Tower region. As such, if the map of the latter region hasn't been unlocked, the player will have to rely on the visual cue provided by the map displayed in the quest's pedestal to arrive to the location.