From Zelda Dungeon Wiki
Jump to navigation Jump to search
Want an adless experience? Log in or Create an account.
Twilight Realm 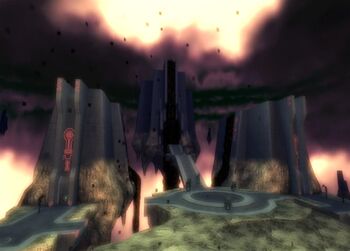 The Twilight Realm is a parallel dimension to Hyrule stuck in perpetual Twilight. It is composed of darkness and shadows where the only light source comes from the two sacred light orbs, known as Sols. The only appearance the realm makes within the series is in Twilight Princess, where Zant has taken control of the Twilight Realm and turned its citizens into monsters. Midna is also from the Twilight Realm, and is the realm's rightful leader. The Realm itself is quite small in size compared to Hyrule and it features many scattered rock islands, suspended in the horizon. The most notable locations are the three islands that house the Palace of Twilight. There is only one notable connection or entrance to this realm and that is via the Mirror of Twilight.

In the tale told by the Light Spirit, Lanayru, he tells of a group of sorcerers named the Dark Interlopers. This tribe excelled in shadow magic and intended to use the power of the Fused Shadow to seek domain over the Sacred Realm. However the Light Spirits intervened, they took the Fused Shadows and broke them into four separate pieces. With the power of the Fused Shadows gone from their grasp, they were banished to the realm of twilight. Over time, due to the appearance of the light source being Sols, the Dark Interlopers eventually evolved of what become to be known as the Twili.

This realm became to be very peaceful and in time a monarchy was established in order to lead the Twili. Zant had been a loyal servant to the royal family of the Realm for many years and he was supposed to be next in line for the throne. However, it was Midna who was chosen as the true leader, being known as the Twilight Princess. Zant, distraught by this news, looked to the heavens for an answer. He was gifted a mysterious foreign power by his supposed god.

This power was gifted to Zant by Ganondorf. Ganondorf was sent to Arbiter's Grounds to be executed, but the execution failed and Ganondorf was able to break free. Ganondorf charged at one of the Ancient Sages with the sages' own sword, killing the water sage. In response to this action, the remaining sages decided the only option now was to seal Ganondorf into the banished Twilight Realm. Ganondorf housed his power into Zant at one request, that he merge light with shadow, therefore creating complete darkness. Zant took this power and falsely ruled the Twilight Realm, turning its habitants into mindless Shadow Beasts and Midna into a helpless imp. He also merged the twilight realm with the light world as was Ganondorf's request.

In the game, Link first encounters the Twilight Realm after he is attacked by King Bulblin. He wakes up after being unconscious to find a Wall of Twilight, he is then dragged through into the Twilight of Faron Province by a Shadow Beast. Due to Link being the chosen hero, he is transformed into a divine beast, Wolf Link. The beast was then taken to Hyrule Castle, where he is imprisoned. Once waking up inside the jail, Link is chained to the wall, this is when he first encounters Midna. She helps Link escape from the jail and teams up with him to reach the princess. When reaching the room of Princess Zelda, she then tells Link and Midna about Zant and how she was forced to surrender, thus how the world has been transformed into a world of shadows.

Once returned to Ordon Village, Ordona tells Link about the three provinces across Hyrule, that are suspended in Twilight. He mentions that the light has been stolen from the other three Light Spirits, Faron, Eldin and Lanayru. Link is tasked with restoring the light to these provinces. For Link to achieve this, in each province he is gifted with a Vessel of Light, which he must fill with sixteen Tears of Light. After doing this the Light is restored to the provinces and Link is transformed back into his Hylian form.

Later on in the game, Link has to restore the Mirror of Twilight by finding the three missing Mirror Shards. This allows him access to the Twilight Realm, where he is tasked with taking down the ruler of Twilight, Zant. Upon entering the realm Link has to return the two Sols to the plaza. Once the Sols have been returned to their original position it powers up Link's Master Sword, giving him the power to drive away darkness. This newly-powered up Master Sword gifts Link the ability to transform the harmless Twili from Shadow Beasts to their natural form with the Sols' light. It also allows Link to clear up the shadows that block the entrance to Zant's Palace. Link is now able to confront Zant and thus the boss battle takes place. Once defeated, Midna uses the power of the now complete Fused Shadows to ultimately kill Usurper King.

During the final events of the game, Ganondorf is defeated by Link and Princess Zelda is saved. The curse that was set on Midna by Zant now fades and the four Light Spirits return Midna to her true form. Upon saying her goodbyes to Link and Zelda, Midna shatters the Mirror just as she departs. Thus breaking the only known connection between Hyrule and the Twilight Realm.