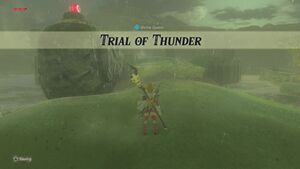 The paradoxical raincloud above the Thundra Plateau as seen from the Ridgeland Tower; it requires the Trial of Thunder to be cleared to go away.

Trial of Thunder is a Shrine Quest from Breath of the Wild.

When Link arrives at the Thundra Plateau, located just west of the Ridgeland Tower, this will begin the shrine quest. Until Link reaches this area and completes the shrine quest, it will continuously be thunderstorming. Thus, Link will need to have Shock Resistance, or he must unequip his electrified weapons.

The objective here is to get the four colored orbs onto the plateau and into their corresponding statue foot pedestals.

Once all four orbs are on the plateau, place them in their correct positions. The Toh Yahsa Shrine will appear and complete the quest.

To complete shrine, blowup all the boulders in the shrine with some Bombs. Then position the large metal block so that you can climb on top of it, and then up the staircase. Climb up a second staircase and then use Magnesis to grab the block and place it on the massive floor switch that is underneath the alter.

There is a treasure chest beneath the entrance, behind the blocks and it contains the Rubber Armor. A second treasure chest is found on the right and Link can knock it down by using Magnesis on the large metal block or the already opened treasure chest. This chest contains an Opal gem.