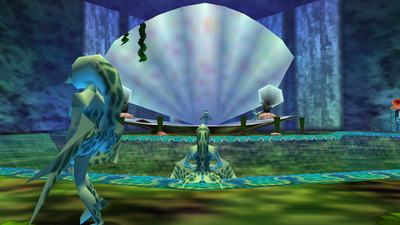 Zora Hall is a location within Majora's Mask. It is home to the Zora race and is located in Great Bay region to the western section of Termina. It lies to the west of Great Bay Coast shoreline situated around water. The hall is only accessed by navigating underwater in which the entrance is blocked by a Like Like.[1] The location itself is mainly home to a concert hall where the band, The Indigo-Go's, live and practice their melody.

Located in the center of the hall is a concert stage where the band performs. Mikau, Tijo, Japas, Lulu and Evan each have their own rooms in Zora Hall. Zora Hall also contains a Zora Shop where arrows, the Hero's Shield and Red Potion are sold. Once outside, Link can find the Zora Cape, a location that can be warped to. The rooms of band members may only be accessed if Link wears the Zora Mask, disguising himself as deceased The Indigo-Go's member Mikau.[2] The hall is a circular shape that houses a few Zoras, but the fact that this location is underwater makes it inaccessible to other races and solitary.

Link is only able to access this area once he has acquired the Zora Mask from the fallen Mikau. However, it is soon clear that the Zoras are uneasy about the goings on within the region and the problems with the band, that is currently due to perform at the Carnival of Time.[3][4][5] Link must retrieve the seven missing Zora Eggs that were stolen by the Gerudo Pirates.[6] Once retrieved, Link must return them to the Marine Research Lab, where the young Zoras form into a series of musical notes. These notes form a song that the young hero can learn, called the New Wave Bossa Nova. Once Link returns to Lulu and plays the song, she remembers that this was the song her mother used to play for her when she was young.[7] This, in turn, revives Lulu's voice meaning that Link and The Indigo-Go's can rehearse before the carnival.[8]