This article is about the Goron in Ocarina of Time. For the town in The Adventure of Link, see Mountain Town of Darunia. 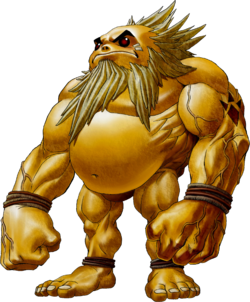 Darunia is the patriarchal leader of the Goron Tribe located on Death Mountain in Ocarina of Time. He is notable for his large temper and significant size and girth. Like other Gorons, he bears markings resembling the Gorons prized treasure, the Goron's Ruby, also known as the Spiritual Stone of Fire.

Link first meets Darunia within Goron City, an enormous cavern built within Death Mountain.[1] Link plays Zelda's Lullaby to gain access to his room; however, upon seeing Link, Darunia is insulted as he was expecting the messenger of the royal family, not a child.[2] Link manages to lighten Darunia's heart by playing him Saria's Song, which sends him into an amusing dance. Afterwards, Darunia listens to Link's plight and agrees to give him the spiritual stone, but only if he defeats the Dodongos that have infested Dodongo's Cavern.[3] After Link accomplishes his task, Darunia considers him a sworn brother and an honorary member of the tribe.[4]

After Ganondorf gains the Triforce of Power and takes over Hyrule, Link assists Darunia in the Fire Temple located in the Death Mountain Crater. Link is informed of the location of said dungeon from Link the Goron. His father, Darunia, named him after Link because he defeated King Dodongo and saved the Gorons from starvation. He believed that Link would be a good example for his child because of his bravery and heroism.[5] Darunia insists on taking on Volvagia, a dragon revived by Ganondorf to terrorize the Gorons; however, he is not confident as he does not hold the "legendary hammer", a weapon used long ago by Darunia's ancestor to defeat Volvagia. Darunia asks Link to free his brothers which have been imprisoned throughout the Fire Temple.[6] Eventually, Link defeats Volvagia using the Megaton Hammer, and Darunia is then revealed as the Sage of Fire.[7][8] Darunia does not forget that he considers Link a sworn brother and reminds him of this, before Link leaves the Chamber of the Sages.

Darunia assists the other Sages in sealing Ganondorf within the Sacred Realm at the end of the game.

"Like all Gorons, this warrior king is a heavyweight on the battlefield. His massive hammer will shake the ground and send enemies flying."

Darunia appears as a playable character in Hyrule Warriors. His main weapon is the Hammer, which enables him to deliver strong blows and cast powerful fire magic.

In the story proper, Darunia is drawn into the conflict when a Gate of Souls opens in his world. Manipulated by Wizzro in the disguise of Zelda, he abducts Ruto and readies the Gorons for war. However, Impa and Sheik manage to snap Darunia back to his senses by defeating him in battle, after which he frees Ruto and pledges the Gorons' assistance to the Hyrulean Army. After this, he is playable.