From Zelda Dungeon Wiki
Jump to navigation Jump to search
Want an adless experience? Log in or Create an account.
Zora Cape 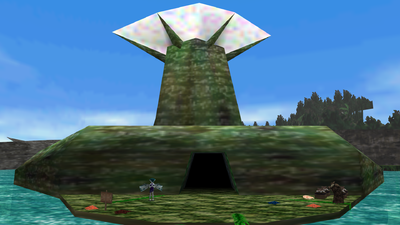 Zora Cape is a location featured in Majora's Mask. The area itself is situated in Great Bay.

Zora Cape features the Zora Game Site, Fisherman's Jumping Game, and in Majora's Mask 3D, the Ocean Fishing Hole. There are several large Like Likes in Zora Cape leading through a pathway to the entrance of Waterfall Rapids.

There is also a small area just outside Zora Hall which is only accessible to a member of the Zora race. Lulu, the singer of The Indigo-Go's, is found here. There is also an Owl Statue which serves as one of the warp points of Great Bay. Off in the distance lies the cursed Great Bay Temple.

Link is only allowed access to the small area just outside Zora Hall while he is Zora Link. Once Link enters the small area, the young hero meets Lulu, who is distressed by recent events in the region and the fact that she has lost her voice. Link must find Lulu's seven missing Zora Eggs, which he must return to the Marine Research Lab. Upon doing so, the baby Zoras form into a series of musical notes. Link can then take out his Ocarina and learn the New Wave Bossa Nova. Returning to Zora Cape and playing the newly acquired song makes Lulu reminisce about her mother, who used to play that song when she was younger.[1] With her newly restored voice, Lulu is able to resume rehearsing before their performance at the Carnival of Time.[2]

Off in the distance of Zora Cape lies the Great Bay Temple, which cannot be accessed at the time due to the murky waters. [3] When Link learns the New Wave Bossa Nova, he can play it to summon the Giant Turtle. Link can use the Hookshot to grapple on to the palm tree on the back of the turtle's shell. This great beast then transports Link to the entrance of the cursed Great Bay Temple.[4]