From Zelda Dungeon Wiki
Jump to navigation Jump to search
Want an adless experience? Log in or Create an account.
Waterblight Ganon 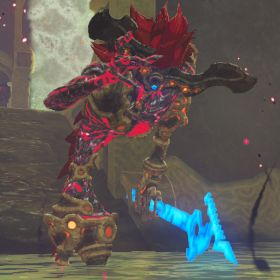 Waterblight Ganon is a blight created by Calamity Ganon to occupy the Divine Beast Vah Ruta. It is one of the easiest blights and it may be one of the first encountered blights.

Waterblight Ganon was created by Astor to corrupt the Divine Beast Vah Ruta, eventually serving as boss of the dungeon when Link came to free it of Ganon's control 100 years later. Due to Lanayru being in relative close proximity to Kakariko Village, it may well be the first Blight that Link encounters. If Link doesn't fight Waterblight Ganon inside of Vah Ruta, he will later encounter the boss in the Sanctum inside of Hyrule Castle, where it will be the second Blight that Link faces at the Sanctum.

In the EX Champion Mipha's Song DLC quest, Waterblight Ganon is fought again with limited equipment in the Illusory Realm.

During the first phase of the battle, Waterblight Ganon will wield a massive spear and will attack you with it. The most risk-reward method of battling it is to wait for it to attack and then try to time a Perfect Dodge on it by hopping away at the last second, followed by a Flurry Rush where you can deliver a number of attacks in a short period of time. The much safer route is to keep your distance and use projectiles such as arrows, or even just tossing your weapons out at Waterblight Ganon.

After you get rid of the ice blocks, there is an opening where you can shoot Waterblight Ganon with an arrow. After successfully hitting it, Waterblight Ganon will move to a different platform. It is best to just stay put, unless it moves to the platform close enough to where you are standing. Arrows with an elemental effect, such as Ice or Shock arrows, will often stun it long enough for you to get over and wail on it. Just repeat this process over and over until its health comes down. Occasionally Waterblight Ganon will use its spear to attack, at which point, just do your best to avoid it. If you can time a Perfect Dodge, this is another opportunity to get in a load of damage. It may also fire laser shots at Link from its eye.

If you do run out of arrows, then Perfect Dodges are about your only method of dealing damage. You can also freeze one of its ice blocks with Stasis, and then hit it back at it. You can damage it with bombs, but it is hard to get close to it.