Gerudo (Breath of the Wild)

This article is about the province from Breath of the Wild. For the virtually all-female race who are the main residents of the province, see Gerudo.

"Gerudo is located in the southwest of Hyrule and has both a massive desert and rocky mountains. The difference between the Gerudo Desert's scorching-hot days and frigid nights is extreme, but hearty Molduga monsters, sand seals, and Voltfruit-bearing cacti thrive in spite of the tremendous temperature swings. There are oases in the desert as well, and the Gerudo have built their own city in the center of the desert around the largest one. Isolated by Gerudo Canyon and the Gerudo Desert, the culture of the Gerudo developed separately from the rest of Hyrule and is unique for that reason." 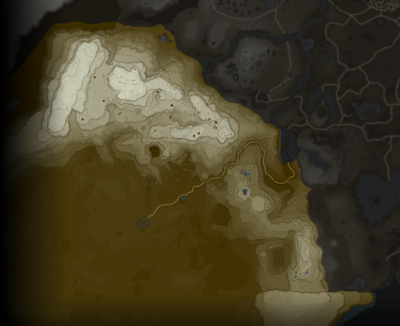 Features of the Gerudo Province

The Great Fairy Tera can be found in the southwest corner of the Gerudo Desert by the Gerudo Great Skeleton.

Enemies in the Gerudo Province

Guardians are mostly scarce in this province. They are found primarily in the southernmost part of the Gerudo Highlands along the southern edge of the Hyrule border, surrounding the South Lomei Labyrinth.

The headquarters of the Yiga Clan can also be found in the Gerudo Highlands, in a canyon to the north of Gerudo Desert.

The dragon Farosh can also be found flying through the Gerudo province along the peaks of the northern Gerudo Highlands. It is most accessible when it crosses the Gerudo Summit, flying low through the small canyon that runs the length of the summit.

Breath of the Wild Key Locations[edit][hide][show]
Retrieved from "https://www.zeldadungeon.net/wiki/index.php?title=Gerudo_(Breath_of_the_Wild)&oldid=283793"
Categories: