From Zelda Dungeon Wiki
Jump to navigation Jump to search
Want an adless experience? Log in or Create an account.
Private Oasis 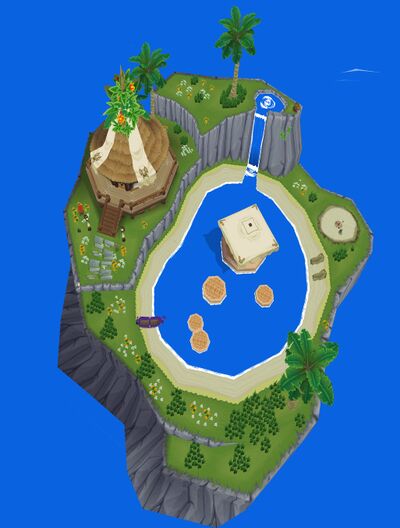 The Private Oasis is a small island paradise one square northwest from Forest Haven in The Wind Waker. Originally, it belonged to Mrs. Marie, but after Link gives her 20 Joy Pendants, she gives him the Cabana Deed, officially giving him ownership of the island. After Link has the deed, the island's name changes to Link's Oasis.

The house has its own butler, who is also the door and a few cutouts throughout the house. At first, the butler does not like Link, but after he has ownership of the cabana he has no choice but to serve Link and eventually comes to respect him. Inside the house are four vases that contain Rupees along with other decorations such as china cups, a lounge chair, a bookshelf, potted plants and a fireplace leading to a Triforce Chart[1] (Triforce Shard in The Wind Waker HD).

Inside the house is a lever that can be pulled with the Grappling Hook, extinguishing the fireplace flames and allowing Link to travel into the basement. The basement is a maze full of monsters and traps, but it eventually leads to a Triforce Chart (GameCube) or Triforce Shard (The Wind Waker HD).

The mini-game in this house is a Sliding Puzzle, referred to by the butler as "the amusements of nobility". The prize for competing the puzzle are Rupees, and Link can obtain many just from playing this game.

Outside the cabana is Old Man Ho Ho, the old man who appears on several islands and is always looking through his telescope. He points out that there are many seagulls around one point, telling Link that there is a 8-eyed Big Octo there. After Link defeats the Big Octo, Old Man Ho Ho vanishes. Another character, a Korok called Drona, has planted one of the Great Deku Tree's seeds here. On the highest part of the island is a Treasure Chart that can be reached with either the Hookshot or the Deku Leaf.