From Zelda Dungeon Wiki
Jump to navigation Jump to search
Want an adless experience? Log in or Create an account.
Composer Brothers 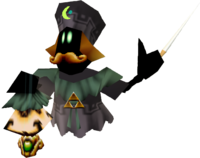 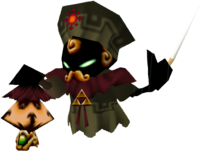 The Composer Brothers are characters that appear in both Ocarina of Time and Majora's Mask. They are two brothers, Sharp and Flat, who have created music for royalty.

In Ocarina of Time, the Composer Brothers are known as Sharp the Elder and Flat the Younger. In the Graveyard in Kakariko Village, there are two gravestones on either side of the large gravestone with the Royal Crest in front of it. If Link examines either of these gravestones, he will be attacked by the ghosts of the brothers, but if he defeats them, they will tell him their story. The brothers wrote a song to control the passage of the sun and moon to honor the departed members of the Royal Family of Hyrule. If Link then plays Zelda's Lullaby and makes his way to the far end of the Royal Family's Tomb, he will find the tune required to play the Sun's Song.

In Majora's Mask, Sharp and Flat were the famed composers for the Ikana Royal Family. Unlike in Ocarina of Time, their portion of the story must be progressed through in order to continue the game's narrative. Sharp succumbs to evil in an attempt to revive the power of the Ikana Royal Family and betrays his brother Flat in the process. Flat teaches Link the Song of Storms, telling Link that the storms are a result of his sadness and anger caused by his brother's actions. Link can then go to Sharp's grave in the Spring Water Cave in Ikana Canyon where he can play the Song of Storms. After Link plays the song, Sharp's cursed soul will be cleansed. Sharp realizes his mistake and reconciles with Flat. Furthermore, the song causes the water to begin flowing in Ikana again, activating the song of the Music Box House.