Difference between revisions of "Guardian Stalker" 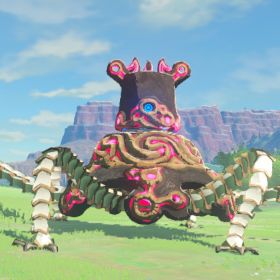 The Guardian Stalker is a type of Guardian that appears in Breath of the Wild.

A deactivated Guardian Stalker; note it leaning to one side and having limp legs.

This massive enemy has characteristics that resemble that of a Beamos. When it sees Link in the distance, its eye lights up, it charges for a few seconds, and it shoots a powerful laser beam toward him. These beams cause massive destruction and cause objects in the distance to light on fire.

Unlike most Beamos, this creature is not stationary and has the ability to move very rapidly in pursuit of Link. The enemy has six massive legs. While it may not have exactly eight legs to fit the traditional definition of an arachnid, the enemy does resemble similar spider-like enemies that have appeared in the Zelda Series before.

Most Guardian Stalkers are active and patrolling a limited area, but can appear blackened, mossy and inactive just like Decayed Guardians until Link approaches. There are some methods for spotting inactive stalkers including the fact that their legs are taut and not slacking (as if ready to walk), and wearing the Champion's Tunic, which displays their health bar before they activate. 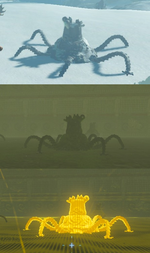 Examples of dormant Guardian Stalkers. Unlike deactivated units, their legs are taut, they're upright and they can be identified by using Stasis.

Like Beamos that have appeared in modern Zelda games including Skyward Sword, Link is able to defeat this massive creature by shooting its eye with the use of a Bow and Arrow. Ancient Arrows in particular are very powerful against these enemies, since one successful shot to the eye will take it down instantly. The Master Sword is also a wise choice, not only for the fact that its power is elevated to 60 when near a Guardian, but also due to Link being able to destroy the creature's legs, immobilizing it. However, this can be done with any sharp weapon. Successfully cutting each leg of the Stalker will shave off 100 HP from it regardless of the power of the weapon or any bonuses or buffs from armor or consumables.

Other strategies that can be used to defeat Guardians include utilizing the Perfect Guard ability, where Link can deflect the Guardian's laser with his shield at the right moment to deal significant damage to the enemy (this method can be done with any shield, regardless of the durability or defense value). It takes three successful parries to take down a Guardian Stalker. Link should be wary though, since if he fails to Perfect Guard, the laser may still hit him and cause devastating damage, or it may hit his shield and can possibly destroy the shield with a single shot.

The Ancient Shield, which can be purchased at the Akkala Ancient Tech Lab, can directly reflect the Guardian's beams back to their eye without the need to perform a Perfect Guard, but at the cost of the shield's durability.

If turned over, Guardian Stalkers are also vulnerable if hit in the blue engine underneath them, which has similar vulnerabilities as their eye.