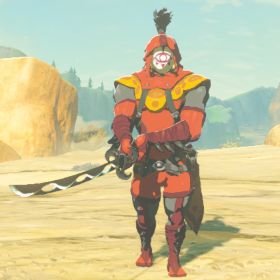 The Yiga Blademaster is an enemy in Breath of the Wild. They are a part of the Yiga Clan, and occasionally teleport close to Link after he has defeated Master Kohga in the Yiga Clan Hideout. They have an affinity for Mighty Bananas, so Link can use this to his advantage during combat, but this is mainly used as a way of distracting the Blademasters inside of the Hideout.