From Zelda Dungeon Wiki
Jump to navigation Jump to search
Want an adless experience? Log in or Create an account.
LD-301 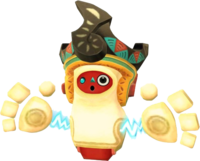 The LD-301 series is a general name for all the Ancient Robots found in the Lanayru Province of Skyward Sword. They are the main race in that province.

The LD-301 robots are creatures "from the past" that only come back to life when a Timeshift Stone is activated. "In the present", i.e. with no Timeshift stone affecting the area, they are discolored and broken, lying on one side. Talking to them will produce a "broken beep" sound effect, and all they say is "..."[1]. However, in the past, they come back to life. Most are occupied with maintenance or mining. In the latter case, they have large hand extensions attached to improve digging. Most comment on Link being a human, or tell him not to disturb them while they work[2], or give information about recent happenings/nearby objects related to them. Link first encounters them as soon as he lands in Lanayru Mine, however, only in their broken form. Since there aren't any Timeshift Stones near, these are never revived.

Several of these robots play a part in the plot. Most notable is Skipper. Scrapper appears to be a similar robot, but a different model, built for transportation. See their main articles for more information.

In Lanayru Mine, a robot comments that one of his friends has been kidnapped the other day.[3] After reaching Lanayru Desert, Link soon finds several cage-like objects, with a Timeshift Shard in one, and a broken LD-301 in the other. Throwing a bomb to activate the Shard will revive the robot, as well as two Technoblins. Defeating these will open both the robot's cage and the Timeshift Shard one, allowing Link to strike the latter again easily whenever he wishes. Speaking to the robot will make him upgrade Link's Beetle to the Hook Beetle! The robot will also thank Link for rescuing him, saying "these creeps" nearly sucked all the electricity from him[4].

After reaching the Temple of Time and finding the entrance blocked, Link explores the area and finds some Timeshift Shards, and a mine cart, that would transport him back to the desert. However, a robot is blocking the cart's way, sitting on the tracks. Talking to him will make him go away, but before that, he will comment that Link's map is outdated, and change it so that is shows the desert like it was in the past. This map shows ancient paths leading from the center outward, and when Link reaches the desert using the cart, he finds out he doesn't sink into the sinksand when walking over such a path. This is essential in navigating the sinksand-covered north portion of the desert. The upgraded map stays the one you use throughout the rest of the game.

Once Link revives the Thunder Dragon with the Timeshift Shard on the cart, he find out the dragon is ill and can't sing his part of the Song of the Hero to him. The robots have planted a Life Tree Seedling but are worried it will take too long to grow, commenting on the desert climate, although in the past it was not yet a desert. Link must then unearth the seedling and take it to the Sealed Temple through the Gate of Time to plant it, and then retrieve the Life Tree Fruit in his own time. (See main article about this part). Although no LD-301s are directly involved in this quest, e.g. by having a speech bubble over their head or modifying your items, their speech can be helpful, and shows they are interested and involved in Link's actions. This is only logical, since the "Master Thunder Dragon" is their creator and protector.