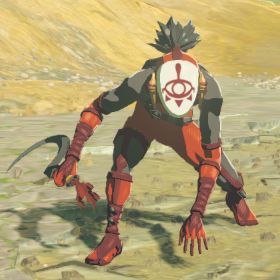 "The lowest-ranked members of the Yiga Clan. They've been dispatched all across Hyrule with a single task: seek out Link and end his life. They're a crafty bunch, sometimes disguising themselves as simple travelers or villagers to get the jump on you. Be wary of suspicious people you encounter. They're very agile and carry a bow and a one-handed sword."

The Yiga Footsoldiers are enemies in Breath of the Wild and Age of Calamity.

Just like the Yiga Blademaster, they will randomly teleport to Link after he defeats Master Kohga in the Yiga Clan Hideout (before then, they merely disguised themselves as travelers). As with other Yiga Clan members, they have a strange love for Mighty Bananas. They carry a Duplex Bow, or either a Vicious Sickle or a Demon Carver, the latter being stronger than the former. They teleport around, and each time they shoot their Duplex Bow at Link. A good strategy is to dodge the arrows and then get hits on them before they teleport away, or, alternatively, landing a direct hit to their head will cause them to be stunned temporarily, if they aren't defeated straight away by the shot.

The Yiga Footsoldiers will often disguise themselves as travelers in order to ambush Link. A good way to avoid them is to refrain from talking to suspicious travelers on the sides of roads. There are eight separate Footsoldiers who remain static, each of whom can be found in two locations. One top of that, there exists a few who will walk around in random locations to fool Link. One way to distinguish if a traveler is a Yiga Footsoldier in disguise is to walk up to them and look above their head. If a name does not appear, there is a good chance it is a Yiga Footsoldier, however as all people who have not been spoken to before have no name, this can be somewhat unreliable. Once they are talked to, no matter what option you pick, they will attack you. The Footsoldiers are shown to be gaunt but fit males by default, but while disguised, they can effectively show themselves as women too. It's not known whether there are women in their ranks indeed, however a Yiga Mii costume suggests that they would wear the same clothing as the men.

As with Yiga Blademasters, defeating them in certain ways, such as with an incomplete Flurry Rush or through burning, will result in them leaving with their weapon, meaning it cannot be obtained as loot. It's assumed that Yiga Footsoldiers don't die once defeated, but rather, teleport away to flee. However, shooting them with Ancient Arrows effectively vaporizes them, implying that they indeed die if this weapon is used against them.

The Footsoldiers in Age of Calamity are considered base enemy troops who first appear during Urbosa, the Gerudo Chief scenario. They are considerably more numerous than in Breath of the Wild, but are noticeably weaker in comparison. They share the same moveset as in the parent game, though they are more passive.