Difference between revisions of "Purah" 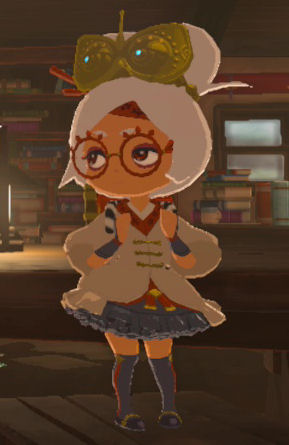 Purah as seen in Breath of the Wild

Purah is a Sheikah woman from Breath of the Wild. After aiding the Champions alongside her younger sister Impa and fellow researcher Robbie during the Great Calamity, she moved to Hateno Village and founded the Hateno Ancient Tech Lab.

It's necessary to have talked to Impa at Kakariko Village in order to talk to Purah, as she'll otherwise tell Link to go back and talk to Impa.

Purah is a member of the Sheikah tribe, and one of only five located outside of Kakariko Village. She can be found in the Hateno Village at the Hateno Ancient Tech Lab where she develops Sheikah technology with Symin.[1]

Of the three Sheikah who experienced the Great Calamity, Purah is the oldest at 124, four years older than her both her fellow researcher Robbie and her younger sister Impa. Despite this, she has the appearance of a six year old, the result of an age reversal experiment which she details in her diary. Purah is responsible for the research which provided upgrades to several of the Sheikah Slate's runes. [2][3]

When Link first arrives at the Ancient Tech Lab, Purah immediately recognizes Link, as he has not changed in the last 100 years, but is surprised that Link doesn't remember her.[4][5] Purah is responsible for helping take Link to the Shrine of Resurrection and put him safely into the Slumber of Restoration.[6][7][8]

When asked about her young appearance, Purah immediately snaps back at Link, calling him rude for asking, although quickly realizing that it is only logical due to appearance that one would assume she was a child.[9] Purah will tell Link that now that he's back after 100 years, he must defeat Calamity Ganon and rescue the beloved Princess Zelda. First though, Link must restore functionality to the Sheikah Slate.[10] Purah will task Link to bring the Blue Flame from the Ancient Furnace in town. This will power the Guidance Stone, allowing her to restore Link's missing Runes.[11][12][13]

Purah guides Link to the Ancient Furnace, stating that it is right behind Reede's house and is visible from just outside the tech lab.[14] She advises Link to use a Torch and to light the village lanterns that are along the way. However, if it stars to rain, then just like a normal flame, the blue flame will go out.[15][16]

After carrying the Blue Flame to the Ancient Tech Lab and lighting the Furnace, the Guidance Stone will begin to react to Link's Sheikah Stone.[17][18][19] Purah will use the Guidance Stone to restore the Camera, Hyrule Compendium, and Album missing files.[20]

After restoring the Sheikah Slate, Purah asks Link to take a picture of her and then to show her.[21] This will give Purah the idea that since Princess Zelda often used the camera feature on the Sheikah Slate, she likely took all the pictures that were stored on the camera. Since Link was Zelda's appointed knight, it was likely that Link was present while these pictures were taken.[22] Purah suggests that Link return to Impa as she has a hunch that these pictures can be used to help Link restore his memory.[23]

After speaking with Purah, this will move forward with the Locked Mementos main quest. Additionally, she asks Link to bring her some Ancient Materials, which will unlock two new side quests, including Robbie's Research and Slated for Upgrades. She mentions that the ancient materials are not only useful to her, but also to Robbie, over at the Akkala Ancient Tech Lab.

Purah's bedroom can be found at the very top of the Hateno Ancient Tech Lab building. Despite her spending the entire day and night at the actual tech lab, she does have a full bedroom, complete with a bed and several bookcases. She also has a chalkboard filled with information from her research. Most notably, at the center of her room, Link can find Purah's Diary on a small table.

Location within Purah's bedroom at the top of the Hateno Ancient Tech Lab.

After restoring the Runes on the Sheikah Slate, this will also trigger the start of the Slated for Upgrades side quest. Purah will task Link in acquiring and bringing Ancient Materials to her, so she can upgrade some of Link's Runes.[24][25][26]

After upgrading the Sheikah Sensor +, Symin will call over to you, as he is greatly interested in the upgrade.[34][35] Talking to Symin will trigger the start of the Sunshroom Sensing quest.