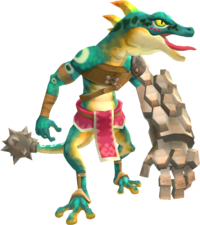 Lizalfos as seen in Skyward Sword

Lizalfos are lizard-like enemies that appear in four games in The Legend of Zelda series. They are usually experts at combat and sometimes even have body armor.

Lizalfos in The Adventure of Link are large armor-clad hulks whose behavior is nearly identical to Iron Knuckles, charging at Link and attacking with spear and mace. Orange and Red Lizalfos are primarily encountered in the forests of Eastern Hyrule around Kasuto and the Hidden Town of Kasuto, though Link first comes across the beasts on Maze Island in the cave where the Kidnapped Child is being held. The more dangerous blue variety are exclusive to the Valley of Death and attack by hurling maces at Link that can only be repelled with an active Reflect Spell. On the path south from Nabooru, Link also comes under attack from rock-throwing Red Lizalfos that sit high atop walls and are unreachable, even with the Jump Spell equipped. They can be destroyed, but by casting Spell or Thunder. Orange, Red, and Blue Lizalfos yield 150, 100, and 200 experience, respectively. Rock-throwing Lizalfos give 50 experience.

Lizalfos in Ocarina of Time have little armor, and are very agile. They aren't a very common enemy, and aren't very powerful either. Link first encounters this enemy in Dodongo's Cavern, Lizalfos being the mini-bosses of that dungeon. The best way for Link to defeat them is to us a shield to block their attack causing the Lizalfos to lose its footing for a short period of time allowing Link to strike. There is only one type of Lizalfos in Ocarina of Time. The Lizaflos can leap over attacks and usually run away to another platform after two strikes. Deku Nuts may stun them for a short period of time allowing Link a window in which he can strike them with his sword.

Lizalfos in Twilight Princess, however, are much different than in Ocarina of Time. Link first encounters them in the Lakebed Temple, with the enemy having barely any body armor and a pitiful shield. The Shield Attack and Back Slice are very effective strategies to defeat them, in addition to a later Hidden Skill, the Helm Splitter. After the Master Sword is obtained, they are among the more plentiful enemies in the game.

Lizalfos in Skyward Sword resemble lizards with human-like attributes. They wield stone gauntlets, which they can use to block Link's attacks. These Lizalfos have a very defensive attack strategy. They will normally dodge out of the way of any attack tried with the sword unless they are taunting Link. When taunting they protect themselves with the stone gauntlet. If Link's sword hits the gauntlet they immediately attack with their tail. They can also breath fire to damage Link. Directional slashes are necessary to hit this enemy, followed by crazed sword slashes. They take 9 hits with the Goddess Sword.

Found in the Fire Sanctuary, Dark Lizalfos exhibit the same behavior as normal Lizalfos except they are faster and breath dark smoke which curses Link, making him unable to draw his sword or use any items for a short amount of time.