Ending of Ocarina of Time

The ending of Ocarina of Time has multiple outcomes and serves a pivotal moment in the Timeline.

After Link defeats Ganondorf and the Sages seal him in the Sacred Realm, Zelda congratulates Link for his heroic efforts and apologizes for her actions of trying to control everything. Zelda then asks Link for the Ocarina of Time which she uses to send Link back to the past where he's suppose to be and asks him to leave the Master Sword within the Pedestal of Time to seal the paths between the past and the future.

The following is a list of events as they occur chronologically during the Ending Credits of Ocarina of Time. 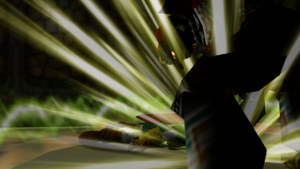 Despite Link's best efforts, when he challenges Ganondorf, he falls in battle, allowing Ganondorf to come into possession of the Triforce of Courage, along with the Triforce of Wisdom that was within Princess Zelda. He transforms himself into the Demon King but, with a last-ditch effort, Princess Zelda and the Six Sages seal Ganon and the Triforce within the Sacred Realm. This eventually leads to the backstory and events of A Link to the Past. 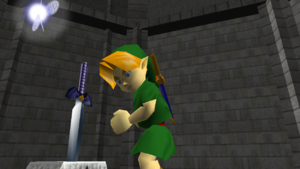 After Link defeats Ganondorf, Princess Zelda plays the Ocarina of Time to send Link back so that he can relive his childhood. Link takes the knowledge he learned to a young Princess Zelda, warning her of Ganondorf's ultimate plan.

Some time later, when Link ventures off on the journey outlined in Majora's Mask "in search of a beloved and invaluable friend", Zelda gives Link the Ocarina of Time.

Years later, Princess Zelda and the Royal Family sentenced Ganondorf to execution, leading to the events of Twilight Princess.

A world at peace... without a Hero.

After Link defeats Ganondorf, Princess Zelda sends Link back to relive his childhood. However, in this Adult ending, there no longer exists a Hero, and eventually when Ganondorf escapes from his seal, there is no hero to stop them. The King of Hyrule then entrusts the fate of the kingdom to the Gods, who flood the world, sinking the land of Hyrule and Ganondorf at the bottom of the ocean. This leads to the events of The Wind Waker.