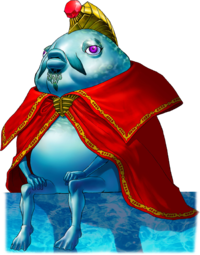 King Zora is the king of the Zoras, a common race in The Legend of Zelda series. He usually is rather large, and has a round shape. This is a huge difference from the rest of the Zora race, who are mostly tall and skinny. One could easily use these features to distinguish him from the other races. He appears in three games, and is mentioned in an additional game.

Main article: King Zora (A Link to the Past)

It is not stated that King Zora is in this game, but the Zora that gives Link the Flippers has the distinct features of the traditional King Zora. See this page for more details.

King Zora, also known as King Zora De Bon XVI,[1] is the ruler of the Zoras in Ocarina of Time. He is also the father of Princess Ruto. He can be found at the upper most portion in Zora's Domain, within King Zora's Chamber. He is a very large Zora who wears a red vest and is considerably larger than any of the other Zora's.

When Link first meets King Zora, he is worried about his daughter and wants to know her whereabouts. It is at this point where Link has to bring him a bottle found in Lake Hylia, which contains a note from King Zora's daughter, Princess Ruto. King Zora will then move aside, allowing entrance to Zora's Fountain where he can find Lord Jabu-Jabu.

Later on as an adult, he is frozen over and Link must use Blue Fire to thaw him out. As a reward for doing so, King Zora will present Link with the Zora Tunic, allowing Link to breath underwater.

King Zora is also involved in the Trading Sequence, where he provides the Eyeball Frog when you bring him the Prescription.

While on his deathbed, King Zora is saved by Link from a Magic Potion. As a reward, King Zora allows Link to enter Jabu-Jabu's Belly and continue his journey. For more details, see this page.

Husband of Queen Rutela, King Zora died before Twilight Princess' story took place. He is the creator of the Zora Armor that Link must use to enter the Lakebed Temple, which was stored in his grave after he died.[2]

King Dorephan is the head of the Zora, living in the central chamber of Zora's Domain. He is the father of Mipha and Sidon. When Link first arrives at Zora's Domain, the King is pleased to find out that Link is the same person from 100 years ago, who was friends with Mipha. He gifts Link the Zora Armor and tasks Link with acquiring Shock Arrows from the Lynel atop of Ploymus Mountain.