The Wind Waker begins by telling the tale of Ocarina of Time. After defeating Ganondorf, the Hero of Time left the land, never to return. When Ganondorf later escaped from his prison, the people of Hyrule expected the Hero to return and save them once again, but he never came back. The citizens only option was to pray to the Gods for salvation from this terrible evil. "This is but one of the legends of which the people speak... Long ago, there existed a kingdom where a golden power lay hidden. It was a prosperous land blessed with green forests, tall mountains, and peace. But one day a man of great evil found the golden power and took it for himself... With its strength at his command, he spread darkness across the kingdom. But then, when all hope had died, and the hour of doom seemed at hand... ...a young boy clothed in green appeared as if from nowhere. Wielding the blade of evil's bane, he sealed the dark one away and gave the land light. This boy, who traveled through time to save the land, was known as the Hero of Time. The boy's tale was passed down through generations until it became legend... But then...a day came when a fell wind began to blow across the kingdom. The great evil that all thought had been forever sealed away by the hero... ...once again crept forth from the depths of the earth, eager to resume its dark designs. The people believed that the Hero of Time would again come to save them. ...But the hero did not appear. Faced by an onslaught of evil, the people could do nothing but appeal to the gods. In their last hour, as doom drew nigh, they left their future in the hands of fate. What became of that kingdom...? None remain who know. The memory of the kingdom vanished, but its legend survived on the wind's breath. On a certain island, it became customary to garb boys in green when they came of age. Clothed in the green of fields, they aspired to find heroic blades and cast down evil. The elders wished only for the youths to know courage like the hero of legend... The only thing that survived the destruction of the kingdom was the legend of the hero."- Intro Text [1]

Beginning of a Journey 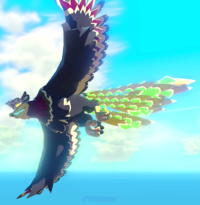 Hundreds of years pass and the story continues on tiny Outset Island, located on the Great Sea. On this particular island there is a tradition that when young boys reach the age of the Hero of Time, they wear the same green garb as the Hero, in hopes that they would know courage. This tradition holds true for a young boy named Link on his birthday, when his Grandmother presents him with the clothing to wear on his birthday.

After donning the famous clothes, a gigantic bird flies across the island, dropping a girl into the forest high on top of the island. Link manages to find and save the girl, known as Tetra. Link's sister Aryll meets him high on the island, and as she is walking across a bridge, the bird reappears, snatching her and flying off to the Forsaken Fortress.

Dedicated to finding his sister, Link joins Tetra and her Pirate Crew, who sail to the Forsaken Fortress. After making his way to the jail his sister is in, Link is grabbed by the Helmaroc King, and taken to the top of the fortress. There, the bird presents Link to a man, who tells the bird to throw Link into the ocean.

Link is awakened on Windfall Island by talking boat named the King of Red Lions, who saved him from a watery grave. The boat tells Link of Ganondorf, the man who Link saw at the Forsaken Fortress, and reveals that he is the same evil spoken of in the ancient legend of Hyrule. They agree to help each other save Aryll and defeat the resurrected Ganondorf. After finding a Sail from one of the merchants, Link and the King head off to Dragon Roost Island.

After destroying an evil monster plaguing the island and irritating the great dragon, Valoo, Link is presented with Din's Pearl, the first of 3 Pearls needed to raise the Tower of the Gods.

Soon after, Link travels to the Forest Haven to see the Great Deku Tree, who offers to give Farore's Pearl to Link after the Koroks' annual ceremony is conducted. However, the Koroks tell the Great Deku Tree that Makar, who was late to the ceremony, fell into the Forbidden Woods. Link offers to save Makar from a monster residing within the Forbidden Woods, receiving Farore's Pearl in return.

Link then travels to Greatfish Isle to seek the deity Jabun. However, Ganondorf, in his search for Nayru's Pearl, destroyed the island. Quill, the Rito postman from Outset Island, was there to inform Link about the island. From him, Link learns that Jabun had been given prior warning and had escaped to a cave behind Outset Island. Quill also mentions that Tetra and her Pirates were also searching for the Pearl, but they were discouraged by the destruction of the island and retreated to Windfall Island, to spend the night, before Link had arrived. Link chases the Pirates; while doing so, it is revealed that Ganondorf cursed the Great Sea, creating an eternal storm and an eternal night. When Link reaches Windfall Island, he sneaks into the Bomb Shop and finds that Tetra and her Pirates had held up the Bomb Shop's owner to acquire bombs. Whilst watching the pirates, Link is seen by Tetra, who secretly works in his favor by offering to the pirates to stay at the island until day breaks (which, of course, will not happen for the time being). Link also overhears the pirates talking about the password to their ship. Link gains access to the ship this way. He then meets Niko, who challenges Link to a harder version of the platform challenge done when Link first boarded the ship. After Link finishes the challenge, Niko gives Link some of the bombs that the Pirates had stolen.

Link then sails to Outset Island, where it is revealed that his grandmother had fallen into depression with Aryll's kidnapping and Link's departure. After opening the Fairy Fountain in the woods at the top of the island, Link helps cure his grandmother of depression; in thanks, she gives him Elixir Soup. After this, Link sails to the rear of the island, where Jabun has defended the grotto with a whirlpool and a large stone gate. Link breaks down the gate with the Bombs and meets with Jabun. The King of Red Lions convinces Jabun to give Nayru's Pearl to Link. Link now has all three pearls.

Link then places the three pearls on the three Triangle Islands on the Great Sea, thus revealing the Tower of the Gods. After making his way up the Tower and completing the divine test of courage, Link finds and rings a bell at the top of the tower which opens the path to the floor of the Great Sea. Here Link finds the ancient ruins of Hyrule and Hyrule Castle, which are in a perpetual state of black and white, where time has stopped moving.

Link pulls the Master Sword from is pedestal, restarting the time inside the Castle and restoring color to Hyrule. Link then makes his way back to the Forsaken Fortress to face off with Ganondorf once again. Ganondorf reveals that pulling the Master Sword out of its pedestal released his powers, making him stronger than ever. Link is then knocked down and almost killed by Ganondorf, but Tetra arrives in the nick of time, along with Prince Komali and Quill. Tetra distracts Ganondorf, who catches her. He notices Tetra's necklace, which is actually the Triforce of Wisdom. Here it is revealed to Ganondorf, Link, and Tetra (Who previously did not know). Komali and Quill then whisk Tetra and Link away. Valoo, who had traveled with the Rito, then sets fire to and destroys Ganondorf's base at the top of the Forsaken Fortress. The rescue team then drops Tetra and Link off at the Tower of the Gods. The King of Red Lions takes the two to Hyrule, where the boat is revealed to be occupied by the spirit of Daphnes Nohansen Hyrule, a former king of Hyrule. The King then confirms that Tetra is Zelda; Tetra is turned into Zelda through the power of the Triforce of Wisdom. With Zelda now safe within Hyrule Castle, Link can now search for a way to stop Ganondorf from taking over the Great Sea.

After restoring the Sword with the power to repel evil, Link learns about the Triforce of Courage from the King of Red Lions. The gods then close the portal to Hyrule. To unlock the portal once again, Link must collect the 8 shards of the Triforce of Courage that broke apart when the Hero of Time left the land of Hyrule. Once he finally collects these, Link shows the piece to the gods, who open the portal. Link then gains the title Hero of Winds. Once in Hyrule, Link and the King find Hyrule Castle breached, as Ganondorf has captured Princess Zelda and taken her to his Tower near the Castle.

Before reaching Ganondorf, Link defeats the previous four bosses from Dragon Roost Island, the Forbidden Woods, the Earth Temple, and the Wind Temple. Link then confronts Phantom Ganon in a room maze puzzle, which involves Link finding the correct door to enter in a series of rooms. Link receives the reward for completing the puzzle, the Light Arrows, which he then uses to destroy Phantom Ganon once and for all. Link then confronts Ganondorf at the top of the tower. Ganondorf turns into a grotesque puppet of himself, which has three phases. After Link defeats Puppet Ganon, Ganondorf challenges Link to face him on the roof of the Tower.

At the top of the Tower, Ganondorf brutally knocks Link unconscious to extract his Triforce piece. Ganondorf then brings together all three pieces of the Triforce, bringing it together for the first time in hundreds of years. Ganondorf then speaks his demands to raise Hyrule from the ocean and make the land his. Before he can touch the Triforce to seal his demands, Daphnes Nohansen Hyrule appears out of nowhere, touches the Triforce, and lists his own requests. These include drowning what is left of Hyrule beneath the Great Sea, along with giving Link and Zelda a future above the waves.

Furious at losing the Triforce, laughing crazily, Ganondorf challenges Link and Zelda to a battle to the death under a rapidly deteriorating force-field, which had kept Hyrule dry since it sunk beneath the waves. Link, with Zelda's help, prevails and kills Ganondorf by stabbing the Master Sword into Ganondorf's head. Ganondorf becomes the new pedestal for the Master Sword - at death, the evil villain turns to stone. After a short speech, Daphnes Nohansen Hyrule entrusts the as-yet undiscovered land of New Hyrule to Link and Zelda. After the speech, the barrier keeping the ocean from flooding Hyrule completely disintegrates. The King, his duty done, dies with Hyrule, while Link and Zelda float to the surface. They are found by the Pirates, who return them to Outset Island.

After the Staff Credits, Link sets sail on the King of Red Lions, now devoid of Daphnes Nohansen Hyrule's spirit, along with the Pirates, who sail away on their own ship.