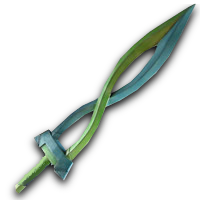 The Fierce Deity Sword is the weapon of Fierce Deity Link in Majora's Mask and Hyrule Warriors. It is also available as an amiibo-exclusive weapon in Breath of the Wild 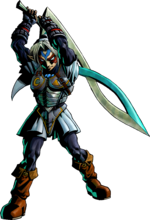 The Fierce Deity Sword is the sole weapon of Fierce Deity Link in Majora's Mask. The sword fires Sword Beams when Link locks on to a target. The sword can only be obtained and used when Link wears the Fierce Deity's Mask. Both a direct hit from the sword and the beam do four times the damage of the Kokiri Sword, making either strike as powerful as the Great Fairy's Sword. These attacks can be stacked together to do a total of eight times the damage of the Kokiri Sword, effectively making it the most powerful sword in the game.

"A peculiar greatsword allegedly used by a hero from a world which the moon threatened to fall. It slashes wildly in battle as if possessed by a fierce deity."

The sword itself is a two-handed weapon. It represents the sword used by Fierce Deity Link in Majora's Mask.