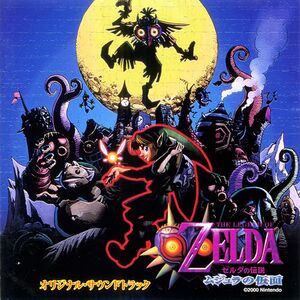 The Legend of Zelda: Majora's Mask Original Soundtrack was originally released on June 23rd, 2000 in Japan and it is the official soundtrack for Majora's Mask. The soundtrack consists of two discs spanning 112 total songs. All the songs were primarily composed by Koji Kondo, but Toru Minegishi also contributed with three songs, including the Battle, Middle Boss Battle and Boss Battle.

The soundtrack was re-release on July 15th, 2013 for North American Club Nintendo members as a reward for those that reached Platinum status for the 2012 Club Nintendo year.