This article is about the tainted Sacred Realm. For the level in Four Swords Adventures, see The Dark World. 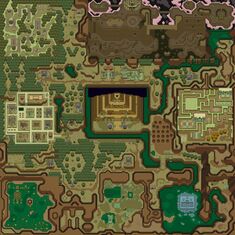 Once the Sacred Realm, the Dark World is an evil, paralleled version of the kingdom of Hyrule which was the result of Ganon's one wish granted by the Triforce. In the Dark World, Ganon reigns over all and his minions run rampant. Ganon felt that he was tricked by the Gods with the creation of the Dark World and seeks to merge it with the Light World in order to create true chaos. The Dark World was introduced in A Link to the Past, and contained eight full dungeons and many side quests and collectibles. Many monuments and landmarks present in the Light World were drastically transformed with the creation of the Dark World. Deserts became swamps, green fields became dead wastelands, Kakariko Village became a haven for thieves, as well as many others.

"In a realm beyond sight,

The sky shines gold, not blue.

— Book of Mudora, US Booklet

"One day, qiute by accident, a gate to the Golden Land of the Triforce was opened by a gang of thieves skilled in the black arts. This land was like no other. In the gathering twilight, the Triforce shone from its resting place high above the world. In a long running battle, the leader of the theives fought his way past his followers in lust for the Golden Power. After vanquishing his own follower, the leader stood triumphant over the Triforce and grasped it with his blood-stained hands. He heard a whispered voice: "If thou hast a strong desire or dream, wish for it..." And in reply, the roaring laughter of the brigand leader echoed across time and space and even reached the far-off land of Hyrule. The name of this king of thieves id Ganondorf Dragmire, but he is also known by his alias, Mandrag Ganon, which means Ganon of the Enchanted Thieves."

[...] "[I]n time evil power began to flow from the Golden Land and greedy men were drawn there to become members of Ganon's army. Black clouds permanently darkened the sky, and many disasters beset Hyrule. The lord of Hyrule sent for the Seven Wise Men and the Knights of Hyrule, and ordered them to seal the entrance to the Golden Land. "