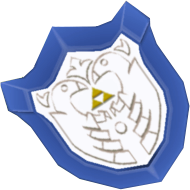 The Mirror Shield is a recurring Shield in The Legend of Zelda series with its protective side covered in extremely polished metal, giving it the appearance of a mirror. As an upgraded version of Link's starting shield, the Mirror Shield can protect him where other shields can not.

The Mirror Shield is extremely versatile. It can deflect magical attacks and River Zora fireballs with ease. In certain cases, it can even reflect enemy attacks. Link can also use it to reflect beams of light.

"Mirror Shield
Link will be able to reflect beams with this Shield. It's thought that the Mirror Shield has magic Power."

In A Link to the Past, the Mirror Shield is found in Turtle Rock. It is the most powerful shield in the game. It can reflect the lasers from Laser Eyes.

In Link's Awakening, the Mirror Shield is located in Eagle's Tower. Although it can reflect fireballs, it serves little purpose in the boss fight with Evil Eagle.

The Mirror Shield is found in the adult portion of the Spirit Temple in Ocarina of Time. It is the final shield that Link obtains in the game. It is located in a treasure chest that can be reached after defeating an Iron Knuckle, a mini-boss of the dungeon. In this game, it is used to reflect light on to sun symbols and walls to solve various light puzzles. It is also crucial to defeating Twinrova, because the Mirror Shield can reflect their magic attacks back at them.

Unlike the Hylian Shield, it cannot be consumed by a Like Like (due to that fact that there is only one found in the game, and cannot be purchased in any store) and it will destroy certain projectiles instead of reflecting them.

It is interesting to note that in the first Nintendo 64 version of Ocarina of Time, the shield possessed a symbol almost identical to the crescent moon of the Islamic religion. In later versions, this was changed to the symbol of the Gerudo.

The Mirror Shield also appears in Majora's Mask. Unlike other incarnations, it has a peculiar design of a face upon it, and this can be seen even in its light reflections. The face can be seen on the Happy Mask Salesmen's carrying bag, as it is also a mask. The shield can be obtained after trading with the Gibdos under the well in Ikana Canyon. Like the Mirror Shield in Ocarina of Time, it can reflect light. This time, large blocks possessing the same sun symbol will appear and can only be destroyed with a beam of light from this shield. It is required to enter the Ancient Castle of Ikana as well as solve some light puzzles in there and Stone Tower Temple.

Interestingly, when using the Mirror Shield to reflect light in the Collector's Edition version of the game, the emitted beam of light shows greenish and black stripes every second or so. This may be due to the fact that the game itself is being emulated on the GameCube, and therefore causes a graphical error.

Link finds the Mirror Shield in The Wind Waker within the Earth Temple. It is guarded by three Stalfos. As usual, it can reflect light on certain designs to solve puzzles. It can also be used in accordance with Medli's harp to reflect multiple beams of light. Light from it can also stun ReDeads, Poes, and solidify Dark ChuChus. It is also used in the battle against Jalhalla. It is the best shield in the game.

The Mirror Shield can only be found in the Oracle series if the player is playing a Linked Game of Oracle of Seasons and Oracle of Ages. After completing one of the games and putting the code into the other, it can be found in the library after receiving the Iron Shield from the Gorons. It is the best shield available.

Obtaining the Mirror Shield in The Minish Cap

In The Minish Cap, the Mirror Shield can only be obtained after defeating Vaati in Dark Hyrule Castle. In addition, the Goron Sidequest must have been completed and a successful Kinstone Fusion with the Goron on the far right. This will make Biggoron appear at the summit of Veil Falls. If Link gives Biggoron a Small Shield, he will start chewing it. After about 20 minutes of not having a shield, Link can return to Veil Falls, where Biggoron gives Link the Mirror Shield.

The Mirror Shield in The Minish Cap can reflect projectiles shot at Link right back at the enemy with a light beam. For example, if an Octorok spat a rock at Link while he is defending, it will automatically shoot the rock back at the enemy.