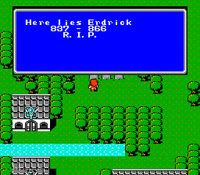 In the Japanese version of Final Fantasy, there is a grave hidden in Elfland that read "Here Lies Link 837 - 866. R. I. P.". In the US version of this game; the gravestone was changed to read, "Here lies Erdrick 837 - 866. R. I. P.", referring to the hero from the Dragon Quest series. However, Link's grave can still be found in the remake of this game in the iOS, Game Boy Advance, PlayStation, and PlayStation Portable. 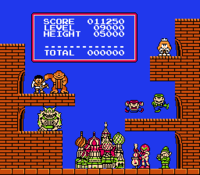 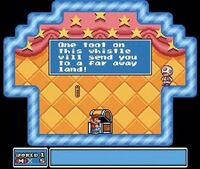 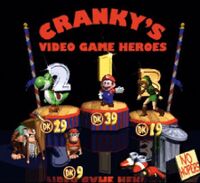 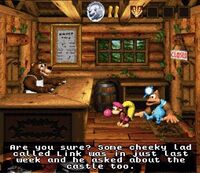 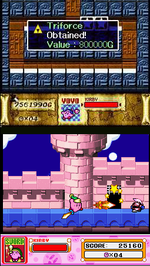 When Kirby gains the Sword ability, he wears a green cap and wield the Master Sword from The Legend of Zelda series. Kirby also gains Link's abilities such as the Sword Beam and Down Thrust. Beside that, many of the treasures in the Great Cave Offensive are based on items from other Nintendo games. One of them being the Triforce; the final treasure on the list, and the most valuable one. 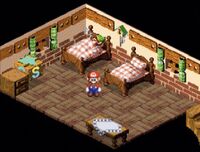 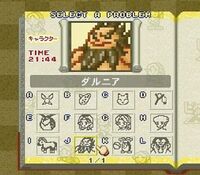 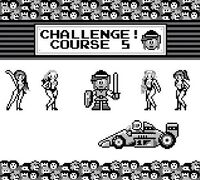 There is Zelda reference in the Fabled Sword mission. The mission description say, "I found the designs for making the same sword used by a legendary swordsman! But, the ingredients are hard to find. Please help. Rewards: 12600 gil, Master Sword, 80 AP". The Legendary Swordsman is a reference of Link, and his weapon is the Master Sword. The Master Sword is one of the most powerful weapons in this game. It description say, "Only master swordsmen may wield this weapon".

Hidden up on Sunny Peak is a mysterious altar. If the player can put the three colored gems in the front of it, he or she will be able to pull out the legendary spoon. This is cameo of Master Sword from Zelda series. One of the shopkeepers in the game also say "Buy somethin', will ya?", the phrase spoken by some of the Merchants from the first Zelda game. Upon receiving items, Hamtaro also holds them above his head in much the same manner as Link.

When Kirby sucks up a Sword-based enemy, he'll get hold of Master Sword and hat resembles the one belonging to Link. The game also is very similar to Four Swords, in that Link has clones in that game (each with a unique color).

The Legend of Zelda is a part of 9-Volt's Microgames (mode that featured classic Nintendo games). Using the D-pad; players will take control of Link and guide him into the cave, avoiding the hazards such a Zola fire and a Peahat. During the credits, players can change the shape of the stars that fly past the screen into small Triforces if they hold Down on the control pad. 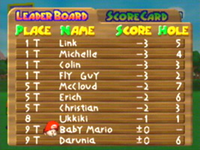 On Stages 2-3 and 2–4, Yoshi has to pass through an underground sewer with old newspaper background. Most of them feature words related to Nintendo including word "Zelda". 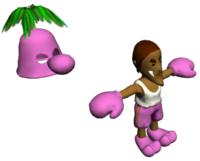 A Latin-style remix of The Legend of Zelda's main overworld theme is featured in the U.S./Europe version of this game. The players also can buy alternate sound effects for their bongos. Some of these sound themes have been taken straight from The Legend of Zelda, A Link to the Past, and Ocarina of Time. 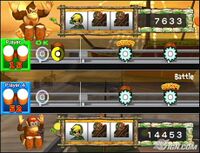 A Latin-style remix of The Legend of Zelda's main overworld theme is returned in the U.S./Europe version of this game. When the player get a good score; they will get a character badge, including a badges from Zelda series featuring Link, Tetra, Zelda, Ganondorf, and Tingle. The face of these characters also featured in a slot machine during a Battle mode.

On Paint Roller's mini-game (called Paint Panic), Kirby may have to draw a number of cameo images related to Nintendo. It includes the Triforce from The Legend of Zelda series. 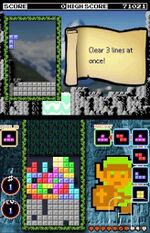 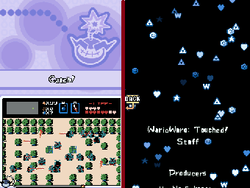 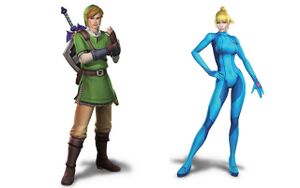 In this game, the players will be able to dress their custom characters either in Link's Skyward Sword outfit or Samus Aran's Zero Suit.

World 5-2 is played from top-down, in a homage to The Legend of Zelda for its 25th Anniversary. One of the star medals requires lighting four torches in a side room. Doing so opens a door and the Zelda "Puzzle Solved" chime plays.

Reportedly, the developers originally wanted the level to be World 2-5, for further homage to Zelda's 25th Anniversary, but felt that it would be placed too early in World 2.[5] 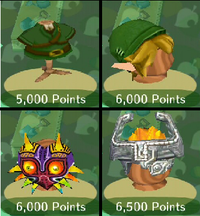 Each time you shop at Tom Nook's store, you'll earn points that can be traded in for rewards. Some rewards are based on items from The Legend of Zelda series. These rewards are Hero's Clothes, Hero's Cap, Majora's Mask, and Midna's Mask.

Several other items also are based on items from The Legend of Zelda series. It includes the Triforce and Master Sword. When you try to use Master Sword, it plays the Zelda "Get Item" theme.

During the Flea Market, one of your villagers might say; "Buy somethin' will you?" This phrase is taken from the Merchants in the original The Legend of Zelda. Beside that; on the dashboard of Kapp'n's bus, you can see text written in Hylian, the language in The Legend of Zelda series.

The Mystery Mushroom power-up gives Mario the appearance of 153 possible costumes, which are unlocked by completing challenges or using amiibos.

The Legend of Zelda costumes are:

This game includes some hilarious Nintendo-themed costumes. Characters can be dressed up as Link, Zelda, and Ganondorf from the Zelda series; and even Mario, Luigi, Bowser, and Zero Suit Samus. Click here for trailer.[6]

In World ⭐-1: Rainbow Run, a bonus room involves stamping on black floor tiles to reveal an image of Link's The Legend of Zelda sprite. On completion, an arrangement of the The Legend of Zelda overworld theme plays until returning to the main level.

Many sound effects from A Link to the Past can be heard throughout the movie, as well as the Hyrule Overworld theme emitting from "Young Neil's" Nintendo DS Lite. 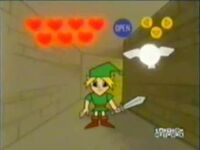 In the episode "Child Fearing", there is a character who looks like Link and has a Fairy. The character was in a game, played by Mayor of Townsville, with a UI based on Ocarina of Time. The Mayor made the character slash his sword, run into walls, and kill a boss-like fairy. The Mayor dies and gets a "start over?" screen, then the screen zooms out of the game, and the viewers can see the Mayor holding what looks like a Nintendo 64 controller.