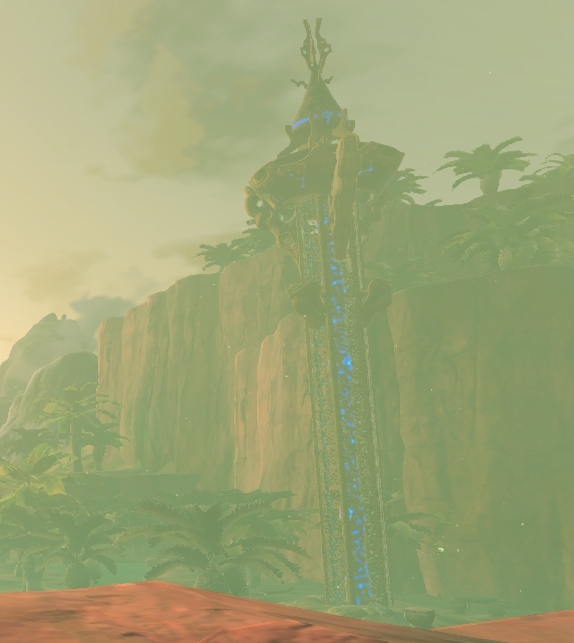 Faron Tower is a Sheikah Tower within Breath of the Wild. It makes up the South Eastern region of the world immediately south of the Hateno Tower region and east of the Lake Tower region.

The tower's travel gate faces South, opposite to the western slope of the Kamah Plateau, which is rich in Luminous Stone Deposits.

Due to the density of the rainforest around it, and its position close to mountains the Faron Tower is somewhat difficult to spot from other regions. The tower also provides an acceptable vantage point to reach the northern cliffs of the Faron Province, especially due to the fact that it's a rainy region.

The tower lacks parapets close to its base, so it's recommended to have several stamina upgrades or stamina increasing items when climbing. If you use the Stasis rune to move the stone slabs around the tower, you will find an air current flowing upwards to allow you to glide higher up the tower. You can also paraglide to the Tower from one of the cliffs around it.

Breath of the Wild Sheikah Towers[edit][hide][show]
Retrieved from "https://www.zeldadungeon.net/wiki/index.php?title=Faron_Tower&oldid=433003"
Category: