From Zelda Dungeon Wiki
Jump to navigation Jump to search
Want an adless experience? Log in or Create an account.
Lynna City 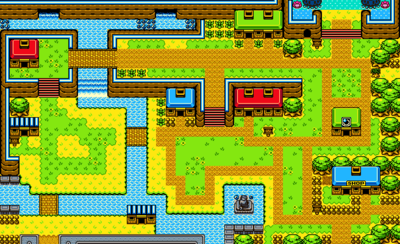 Lynna City is the largest town and one of the central hubs within Oracle of Ages. Found only in the Present, the area was formally known as Lynna Village in the Past. Much like Horon Village from Oracle of Seasons, a bulk of the population lives in this central town. Link will travel through Lynna City early on in his quest and will return often as he visits important locations including the Maku Tree and Vasu Jewelers.

Lynna City is located in the center portion of Labrynna in the Present. There are several entrances to the town from the various surrounding areas. To the east Link will find the Forest of Time, the location where Link first starts his quest. Just to the south, Link fill find South Lynna as well as the Black Tower. To the west and to the north, Link will find the Nuun Highlands, in which the landscape of this region will change depending on which Animal Companion Link has acquired along his quest.

Link firsts visits Lynna City at the very start of his journey, shortly after Nayru has been captured by Veran. Impa will send Link to the village to meet with the Maku Tree. Despite referring to Lynna City, Impa mistakes the location with Lynna Village.[1] In the Present time, the town is referred to as Lynna City.[2] Once Link arrives in town, he can speak with the townsfolk to find that something has gone wrong. Lately some of the townsfolk have been turning into stone and vanishing without warning.[3]

Lynna City is a large, peaceful town that is heavily populated. A river that flows from the Nuun Highlands to the north divides the town. However, there are bridges found throughout the town, allowing Link to navigate freely. Near the center of town, there is a statue with a Mermaid figure on it. Late in the game, after Link has defeated Veran, this statue changes to a statue of Link. The inhabitants of Lynna City will then offers much praise for Link.

The town is run by Mayor Plen, who lives in the large red building near the center of town. The rest of the town is populated by shops and houses that belong to the various residents of the city. The Lynna City Comedian can be found near the small blue house in the center of town. The comedian is very fond of his jokes, but even his own partner disapproves of them.[4] The Comedian plays a role in the Trading Sequence, where Link will give him the Cheesy Mustache in exchange for the Funny Joke.[5]

Towering over the city is the Black Tower to the south. The Tower was initially being built in the Past by Queen Ambi to help guide her lover, the Captain, home to sea. However, when Nayru arrives in the Past, the plans change and the orders are now to build the tower all the way to the heavens.

At the northeast corner of the city, Link will find a small cave referred to as the Maku Road. This short cave leads Link to the Maku Tree, the protector of Labrynna. When Link first meets with the Maku Tree, she will become ill due to events that are occurring in the Past.[6] Link will need to use the Time Portal just to the east to return to the Past.

After Link saves the Maku Tree in the past, he can return in the Present. The gate in front of the Maku Tree will now be open, allowing Link to quickly reach the Maku Tree. The Maku Tree will tell Link that he must collect the eight Essences of Time in order to defeat Veran.[7] She will then give Link the Seed Satchel with some Ember Seeds.

At the north portion of Lynna City, Link will find Bipin's and Blossom's House. Link can travel to this house throughout his quest and can help Bipin and Blossom make decisions concerning their Child. The decisions will have an effect on what type of person the child becomes.

Vasu Jewelers is run by Vasu and is where Link first acquires his Ring Box. Link can return to Vasu at anytime to appraise any of his Seed Rings and have them transformed into Magical Rings. Link can also speak with the Blue Snaketo transfer rings via a Game Link Cable or to use the Fortune Link feature. The Red Snake can be used to transfer rings via a Ring Secret.

The Lynna City Shop is the main shop featured in Oracle of Ages. Link can purchase a variety of goods, including Bombs, Recovery Hearts, a Wooden Shield, the Iron Shield, and the Mirror Shield. After Link completes the Moonlit Grotto and before he travels deeper into the Nuun Highlands, the Shop will also sell a Strange Flute, which will become Dimitri's Flute. However, if Link previously acquires the Strange Flute from the Lynna Village Shooting Gallery, this Flute will not be for sale. Link can later reach the Basement shop, where he can purchase a Ring Box upgrade, Gasha Seeds, a Magical Ring, and a Piece of Heart.

After all the items have been purchased from the Basement of the Lynna City Shop, the room will transform into the Treasure Chest Game. Link can play this game to win Rupees and rare Magical Rings.

Mayor Plen's House is the large red roofed home near the center of the city. Inside, Link will find Plen, the Mayor of Lynna City. If Link speaks to him, Plen will tell Link about the history of the city.[8] Inside of the house, Link will also find a Magical Ring that becomes the Green Luck Ring.

Mamamu Yan's House is the small blue roofed home near the southwest portion of Lynna City. Inside, Link will find Mamamu Yan and her dog. Mamamu Yan is the self-proclaimed top dog breeder in Lynna City. She plays a role in the Trading Sequence where Link can give her the Doggie Mask in exchange for the Dumbbell.

The Know-It-All Birds home can be found in the small blue roofed home at the west part of Lynna City. Inside Link will find 10 Birds that will give Link advice on how to use his basic weapons, as well as information on the changing seasons and the Essences of Time.

Dr. Troy's House can be found at the northwest corner of Lynna City. Inside, Link will find Dr. Troy, an expert on many different creatures found throughout Labrynna. He will often share this information with Link to help him throughout his quest.