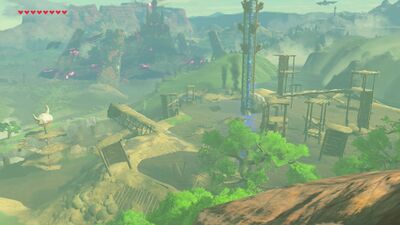 Military Training Camp is an area in Breath of the Wild and a service in Age of Calamity.

The Military Training Camp is a swampy area that surrounded the Woodland Tower, just northeast of Hyrule Castle and southeast of the Great Hyrule Forest.

There are 15 treasure chests that can be found at the training camp, many of which are sunken beneath the swamp. Below is a listing of the treasure chests, roughly from south to north. 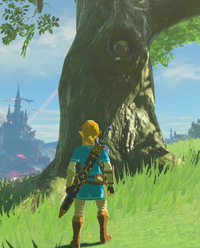 Shoot the acorn in the hole in the tree. 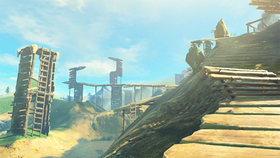 "Those who seek to defend Hyrule... Hone your skills here!"

Run by Rubeo, the Military Training Camp serves the same purpose as the Training Dojo in the first Hyrule Warriors, allowing warriors to be levelled up using rupees rather than fighting. It is unlocked through the Entrance Test quest.

Warriors' levels cannot be raised in the Training Camp beyond the level of the current highest-level warrior the player possesses.

Three upgrades are available for the Military Training Camp, each providing a discount: