From Zelda Dungeon Wiki
Jump to navigation Jump to search
Want an adless experience? Log in or Create an account.
Boss Challenge 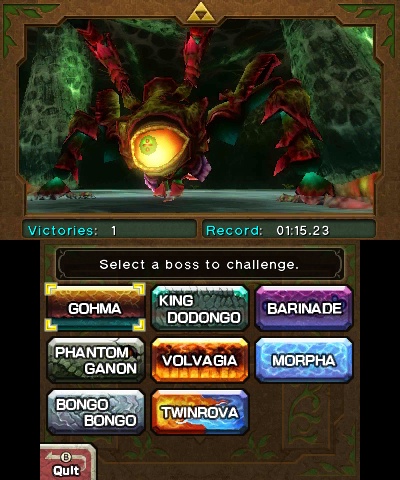 The Boss Challenge is available in both the regular and Master Quest versions of the game, with there being notable difficulty changes between the two versions. The Boss Challenge will showcase how many times you've completed a particular boss battle, as well as what the current record time is.

After Link has have completed the Forest Temple and returned to the Temple of Time, he will find Sheik waiting for him. After speaking to him, he mentions that Link can now return to his tree house in Kokiri Forest and relive boss battles from the past. At this point Link can return and examine his bed, and he'll have the option to revisit these boss battles. At that moment, Link can battle with Queen Gohma, King Dodongo, Barinade, and Phantom Ganon. The remaining bosses will become available as Link completes those respective dungeons.

When Link faces off with some of the bosses, he will be restricted in terms of the number of heart containers he has, the items he current carries, as well as any recovery items that he has in bottles.

In the Master Quest version of the Boss Challenge, Link does not get any recovery items at all. Furthermore, Link only has 3 hearts in Master Quest for the child bosses, and only has 5 hearts for the adult bosses. As with the base game, all of the bosses will do double the amount of damage to Link in the Master Quest mode.

After Link has defeated all eight of the bosses in the Boss Challenge, it will open up the Boss Gauntlet mode. As its name suggests, Link will have to fight all eight bosses, one after another. The Gauntlet will start with Queen Gohma and once she is defeated, will continue on to King Dodogo, with this continuing until Link fights Twinrova.

After defeating each boss, two Treasure Chests will appear and Link will have the option to open one of the two. Below is a chart of the possible items that Link can acquire from opening these treasure chests.

During the Master Quest Boss Gauntlet, Link will begin with only 3 heart containers and once again, the bosses will deal double the amount of damage.