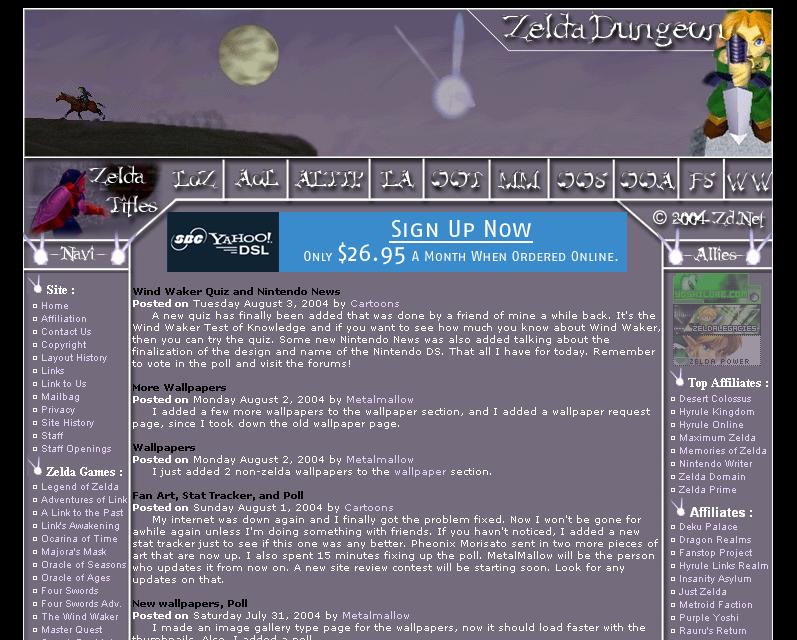 Work began on Layout 6.0 months before its release. However, while mots of the design was completed, the main programmer of the new layout left the website. The assets were still available, but it was not properly coded. Over the course of a few weeks Mases and Cartoons pieced together the layout, which proved to be rather difficult as this was the first layout that was coded in-house since the sites inception. The layout finally launched on March 30th, 2004.

The 6th layout of Zelda Dungeon was the first layout that had a quick navigation system for the Zelda games. This was a trend started by popular Zelda websites such as Zelda Elements and Zelda Universe, and during this period, nearly every single large Zelda website had a similar quick navigation menu. The quick menu and the additional images on the side bars led this layout to be by far the most image complex layout to date. The lavender colored layout was also something quite different than any previous Zelda Dungeon layout, and was a unique look in color for its time. However, after the strong initial reaction of the layouts launch, most viewers of the website did not keep a positive view of the website theme.

During this time period, Zelda Dungeon switched to Cutenews, a news system that allowed users to make edits on the sites index page without having to edit and upload hard files through a FTP program. Having a new content management system like this allowed Zelda Dungeon to have staff members that can work independently to post news articles without having to go through one of the Webmasters or upload through FTP. Thus, during this time period, several new staff members were hired strictly as news reporters. Unfortunately, this turned into a revolving door as very view of the team members from this era ever stuck around for more than just a couple of months.