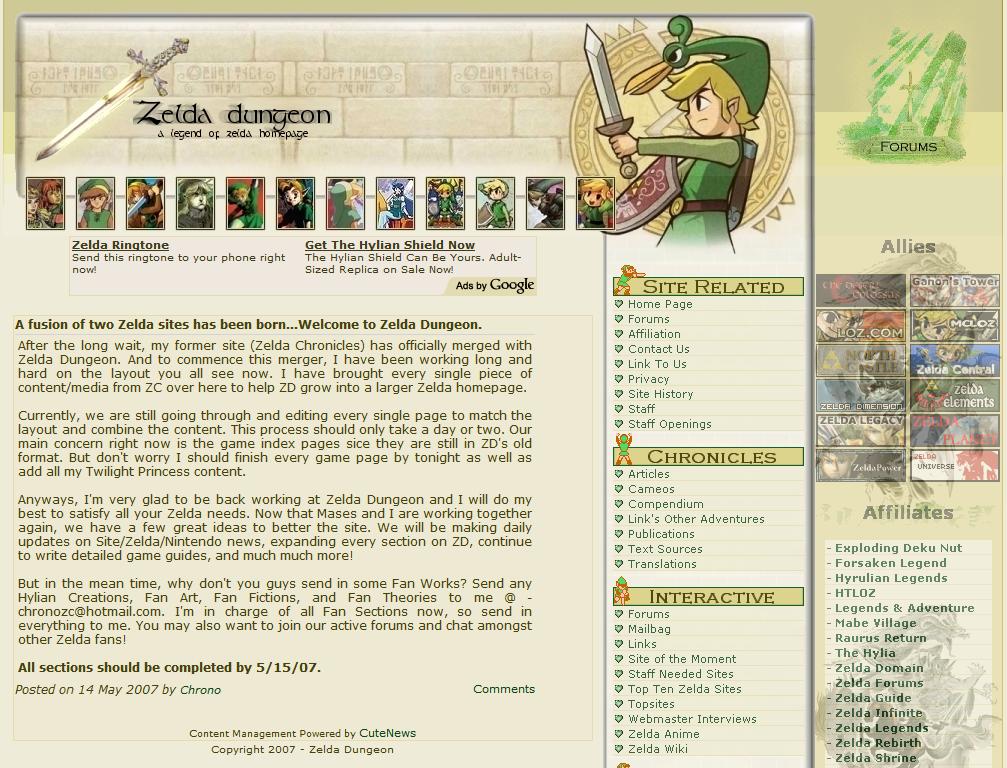 The layout had a few notable differences than any previous Zelda Dungeon based layout, one of them being the color scheme. The tan color offered a fresh look to Zelda Dungeon. This marked the first layout in Zelda Dungeon history that went away from the standard two navigation bar system. While there were still two navigation bars on the website, they were both arranged on the right side of the layout. This also marked the return of a quick links navigation system for all of the Zelda games. When the viewer scrolled their mouse over the game menu at the top of the layout, a small drop down menu would pop up, allowing the viewers to quickly navigate to a specific game guide, without having to go through the game index page. These drop downs did not have a complete listing of every page for the game, as it was believed that the menus would appear too bulky. Instead, they had links to the key pages, such as the walkthrough indexes and more notable collectible guides.

Content during this layout began to really thrive, starting with the continuation and completion of the Legend of Zelda Video Guide, which as of March of 2019, the first video has reached a viewership of over 1.8 million views. Site guides also began to blossom, with a high quality guide created by Caleb Simpson for Majora's Mask. The Majora's Mask guide was a significant change of direction in game walkthrough design at the website, as it now included a lot of side boxes, artwork, and game models, as opposed to just the standard text and screenshot guide. The goal behind these changes was to make the website appear like an online version of one of the official strategy guides.

Since Cartoons left the website earlier within the year, the Zelda Dungeon Forums were becoming neglected by Mases and security upgrades for the forums phpbb software were ignored. The forum had become less focused on Zelda and video games and became more of a place about forum word games, textual role playing games, and more controversial mature discussion. None of which had much to do with Zelda Dungeon or the Legend of Zelda series. There was a clear disconnect between the site and the forum community.

On July 27th, due to poor handling of security by Mases, the Zelda Dungeon forums were hacked into. Later that day, Mases made an announcement about the hacking and temporarily removed the forums from the website. In subsequent announcements, it was announced that the forums were to be put on a hiatus, with hopes of relaunching them sometime in the future with a fresh slate. In its place as a temporary solution, on the 28th of July, website affiliate Zelda Legacy become the new temporary home of Zelda Dungeon forum community until further notice.

On August 19th, 2007, Zelda Dungeon celebrated its 6th birthday with brand new textual and video guide content, making it the largest update in website history up until point. With the massive improvement in game content quality, Caleb Simpson was promoted to a Webmaster position on August 28th, 2007. Just days later on September 2nd, 2007, Caleb completed the Majora's Mask site walkthrough as well as all other Majora's Mask game pages. He also completed the text only version, which subsequently launched the Zelda Dungeon GameFAQs account, where the guide has since received a star rating. The site walkthrough was miles ahead of any previous guide put together at the site and was the new standard for game guides. Multiple other content projects were in the works, but all were put on hold by the imminent release of Phantom Hourglass for the Nintendo DS.

On September 26th of 2007, the first pieces of Phantom Hourglass content were being released for the site, five days before the games launched in the US on October 1st. Just a week after the launch of the game, the first pieces of the Phantom Hourglass Walkthrough were put online and visitors quickly began to flood in as there was high demand for a guide for the newly released game.

On October 20th of 2007, Zelda Dungeon broke its single day visitor mark of 3159 unique visitors, a mark that stood for over two years. The 20th of October recorded 3198 unique visitors, and this record was subsequently broken a number of times in the coming weeks and months. Prior to this month, the site only rarely reached over 2000 visitors. From this point until today, the site has never dipped below 2000 visitors.

On October 16th of 2007, Zelda Dungeon launched a brand new Forum, this time abandoning the old phpbb software, and switching to mybb. The forums were created by Mases, with the support of former webmaster, Cartoons. The forums began to immediately pick up a fan base, many joining to discuss the recently released Phantom Hourglass, while others joining from the old incarnation of the forums. The forum was drastically different than the previous incarnations, with a more heavy emphasis on Zelda content.