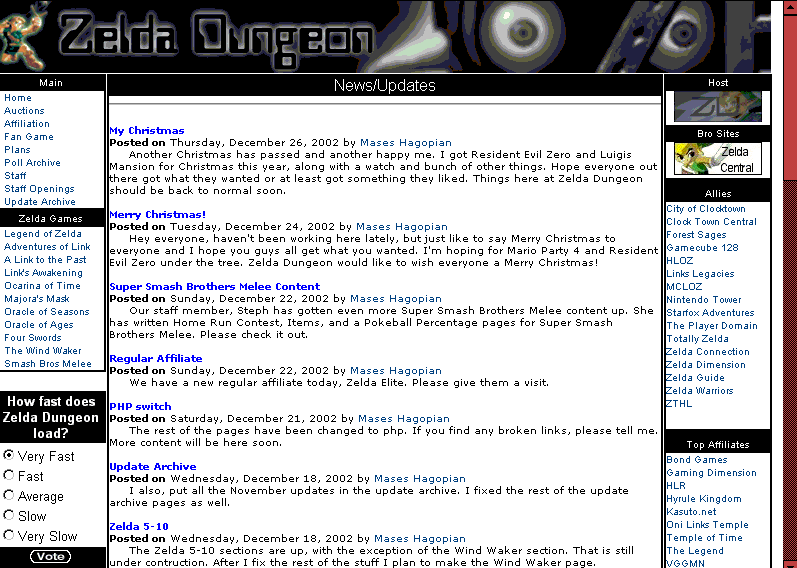 Just prior to the launch of Layout 2.0, Zelda Dungeon became affiliated with one of the leading Zelda websites online at the time, Zelda Central. Victor, the Webmaster of Zelda Central had grown to be close friends with Mases, and because of this, he offered to create Zelda Dungeon a brand new layout. On November 23rd, 2002, layout 3.0 was launched and it was quite a visual upgrade over layout 2.0, as it added more color and structure to the website. Several noticeable changes could immediately be seen with the new layout, including the first official banner that the website had at the top of the layout. In previous layouts, there was just simply a line of text stating the websites name, but now a traditional banner was in place including the sites name and artwork from the Zelda franchise. Also, prior to layout 3.0, the site was always referred to as The Zelda Dungeon, but with the new layout, 'the' was dropped from the website title, and it was now simply referred to as Zelda Dungeon.

In early 2003, Mases applied for a domain name at acidmist.com, a website that offered free domain names. Zelda Dungeon was accepted and the new url for the website was now zeldadungeon.com. In March of 2003, Zelda Dungeon once again contacted acidmist, and this time applied for the free hosting package that acidmist offered. Free hosting would be provided in exchange for the placement of a small banner advertisement at the top of each page of the website. Zelda Dungeon was accepted and in March of 2003 left Zelda Universe and found its new home at Acidmist. Leaving Zelda Universe slowed the growth process of Zelda Dungeon, but Zelda Dungeon was now on its own, outside of the shadow of being hosted at other Zelda websites.