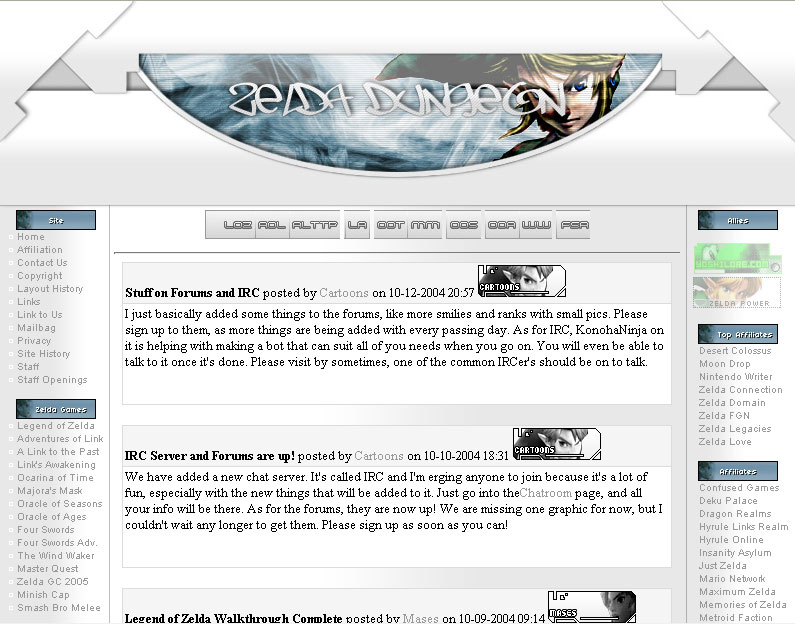 Zelda Dungeon's content areas began making a gradual shift from standard content to full blown walkthroughs during the period just prior to the launch of this layout, as well as through much of this layouts lifespan. The first of these walkthroughs was completed in the summer of 2004 and it was the A Link to the Past site walkthrough. It was the first full game guide at Zelda Dungeon to have a complete walkthrough of the game, complete with both text and screenshots. This new standard of game guides carried over to The Legend of Zelda, which was completed in October of 2004. In retrospect, many of these early guides appear to be quite primitive and have since been replaced, but at the time of their release, it was top of the line material for the Zelda community.

The first generation forums that were hosted by Zelda Legacies had closed down and it was shortly after that talks of relaunching them on Zelda Dungeon came to be. Cartoons wanted to re-launch the forums once again and he did so on October 10th of 2004. This was the first forum software to be hosted by Zelda Dungeon and it became known as the 2nd generation of Zelda Dungeon forums. The forum program used for this \forum was the phpbb software. Phpbb is a very popular free forum software that was used by several Zelda fan websites at the time. Activity at the forum sparked immediately upon the launch of the forums, and a steady incline in activity followed for the next several months.

Near the end of 2004, Cartoons had taken over much of the day to day operations of the website. Mases' focus turned to being almost exclusively on creating game walkthroughs for some of the various Zelda titles.