Stretching across nearly two decades, the Site History of Zelda Dungeon is filled with its share of ups and downs, as well as a wide range of characters that have played a pivotal role in the websites growth and expansion.

Mases Hagopian first played the original The Legend of Zelda back in 1990, but it wasn't the mind-blowing experience that many others had. At the age of just 4 years old, The Legend of Zelda was simply just known as the game with the shiny gold cartridge and nothing else. Flash forward to 1994 when Mases got his hands on the Legend of Zelda: A Link to the Past and quickly fell in love with it. The expansive Overworld, fun gameplay, great difficulty, amazing music, and the dozens of memorable moments along the journey made the game a one-of-a-kind experience.

For Christmas 1998, Mases got a copy of the Legend of Zelda: Ocarina of Time and his love for the series continued, where he even went back and completed all the prior Zelda titles that he previously missed out on.

Leading up to the release of Majora's Mask in 2000, Mases started to become more involved in the online Zelda community. He frequently visited large Zelda websites, including Zelda Power, Zelda Gaming Online, and Ganon's Tower. Mases was always looking for the latest Zelda related news, reading Zelda fan fiction, and checking out secrets in the games.

The site launched on August 19th, 2001 and was hosted at Yahoo Geocities. The website had a very primitive looking layout with very minimal content. The first game guide at the website was started for Ocarina of Time. There was a small amount of Zelda pictures and artwork, as well as some media downloads available for midi songs, which led the site to grow to receiving 25-30 hits per day.

On March 27th, 2002, Zelda Dungeon launched Layout version 2.0, and it was the first layout that was built with html coding. The layout created a consistent appearance across all pages and saw the continued expansion of content creation. The site moved away from Yahoo Geocities and was hosted by a larger Zelda website known as Zelda Odyssey. It was during this time the site also had its first volunteer staff member, and with two team members on the staff, content creation came at a quicker pace, allowing the site to grow to receiving close to 100 hits per day.

On November 23rd, 2002, layout 3.0 was launched and it was a notable visual update to the site. The layout gained a better structure and consistent look, with it being the first layout theme that featured a traditional header. The site name was changed to Zelda Dungeon, dropping the word the' from the title. The site jumped around from host to host during this period, moving from Zelda Odyssey over to Zelda Universe, and then later to Acidmist.com. During this period the site was now able to be reached at www.zeldadungeon.com and jumped up to receiving close to 200 unique visitors per day.

Zelda Dungeon released Layout version 4.0 on May 3rd, 2003. The site layout was pulled from a website that distributed Free website designs. It kept a simplistic look to the site, with a standard two-column setup. The website brought on board a volunteer by the username Cartoons, who would quickly become a Webmaster of the website and one of the most active team members in the sites early years. The consistent work of Mases and Cartoons caused the site to blossom, reaching 500 unique visitors per day, with it peaking at 1,000 visitors in a single day, just days before the sites second birthday. Zelda Dungeon began to partner with affiliate websites, linking to other websites forums, which was the first instance of pointing its users towards a forum community. Hosting troubles temporarily stunt growth until the site finally changed to a new hosting company, unfortunately leaving behind the zeldadungeon.com domain name in the process. The site was now found at zd.telefragged.net.

Layout 5.0 was released on November 25th, 2003. Site viewership continued to grow, with a focus being being put on downloadable content for viewers, including desktop wallpapers, messenger icons, and forum avatars. During this period of time, the site moved to its now current domain name, zeldadungeon.net. 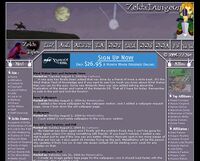 Layout 6.0, the first with a game-navigation bar.

Released on March 30th, 2004, this was the first layout that featured a quick game navigation at the top of the website, with links to all of the Zelda games, a common feature at more prominent Zelda websites during this era. The first era of the Zelda Dungeon Forums were made available during this period, accumulating over 300 registered members and 7,000 total posts.

Layout 7.0 was launched on August 23rd, 2004, just four days after the websites third anniversary. This guide caused the website to shift to more complete game walkthroughs, with the first guides being completed with text and pictures for both A Link to the Past and The Legend of Zelda. The second era of the Zelda Dungeon Forums launched during this time period, using the phpBB forum software.

Layout 8.0 launched on February 25th, 2005. This layout marked the continued expansion of game walkthroughs, including the completion of The Minish Cap walkthrough, which had released not far before. Site traffic soared to over 2,000 unique visitors a day, with a single day record of 3159 unique visitors on April 2nd, 2005. This record would hold true for the next 29 months.

Layout 10.0 of Zelda Dungeon was launched on February 12th, 2006. It was a short lived layout, only lasting a couple of months. During this period, much of the content from Zelda Chronicles had been brought over to Zelda Dungeon, with much of the content being reworked to bring up to new quality standards. This included some new features at the website, including new weekly features such as the weekly character contest, to encourage more fan interaction. 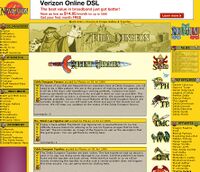 Released on April 19th, 2006, Layout 11.0 received mostly a negative reaction and caused traffic to dip. This designed added a third vertical navigation bar, which included the quick links for the game navigation.

Layout 12.0 was released on on August 19th, 2006, the fifth birthday of the website. During this period of time, Zelda Dungeon viewership dipped to a three year low and many of the team members left the website. Unsure of the future of the website, Mases looked to merge Zelda Dungeon with other Zelda websites with the hope of forming a more thriving Zelda community. Planned mergers with the websites Zelda Compendium and Zelda Legacy fell through and the site became stagnant in late 2006, even with the release of Twilight Princess. Another attempt at a merger with the website, legendofzelda.com, was planned and very briefly implemented, before Mases quickly pulled the plug.

Launched on February 25th, 2007, the new layout was a much simpler and brighter color scheme, with very limited amounts of imagery, and a wide content area. A heavy emphasis on video content occurred during this period, with all site updates being video based updates, recapping new additions to the website and talking about upcoming projects. The Zelda Dungeon YouTube channel was launched during this time period, with beginning of video based guides being introduced. This layout also saw the hiring of Caleb Simpson as a content creator, who would go on to become a significant contributor to the website in the years to come.

Launched on May 14th, 2007, the new layout marked a new path for Zelda Dungeon, with a return of a quick links navigation system, and a two sidebar layout. Viewership at the website began to grow rapidly with a renewed focus on site and video walkthrough content. With the release of Phantom Hourglass in October of 2017, the website broke viewership records that had stood for over two years. This marked the first time in website history that coverage and game guides for a brand new Zelda game were being published in close proximity to a games release.

Launched on November 22nd, 2007, the layout was themed after the Temple of Droplets from The Minish Cap. The initial goal was to design a layout that made it feel like one was actually within a dungeon, with the header having a full ice block pushing puzzle. The site saw notable growth during this period with the completion of the Phantom Hourglass Walkthrough, with the site breaking new records shortly after Christmas of 2007. This culminated with a record breaking day, of over 4,229 unique visitors on January 1st, 2008.

Launched on May 18th, 2008, the website had a change of direction, focusing more directly on game guides and game walkthroughs. Many of the outdated sections of the websites that focused on some of the other aspects of the Zelda community were removed, including sections regarding fan artwork, fan music, and fan games. Instead, the website focused on walkthroughs, and provided updates to other Legend of Zelda websites that did a good job promoting this material. The website also had a much larger pop-out menu for game navigation, allowing for one click navigation to specific chapters in the various walkthroughs. 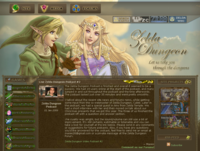 Layout 17.0, with a large piece of fan artwork in the banner.

Launched on October 21st, 2008. During this layout, Zelda Dungeon began producing live video streams, interacting with the audience on the Zelda Dungeon Forums. Live streams included recording live video podcasts, usually with other members of the Zelda community as well as team members. There were question and answer segments, as well as some live interactive games with the audience, including Name That Zelda Tune and Zelda Hangman. Spanning over 13 months, this layout lasted longer than any layout beforehand. With the upcoming release of Spirit Tracks, Zelda Dungeon began to hit new record viewership in late November of 2009.

With the release of Spirit Tracks and a site walkthrough that was completed almost immediately upon release, the site received record viewership. With 44,301 unique visitors viewing the website on December 28th, 2009. The website saw a shift to the Wordpress platform, along with a new comments system which for the first time allowed viewers to comment directly on website articles. Additionally, this site so the rapid expansion of the YouTube channel, with more video walkthroughs and a brand new weekly mailbag. The Zelda Dungeon Facebook page was more frequently being promoted where it garnered its first several thousand followers.

Zelda Dungeon reached new heights during this layout with the lead-up to the release of Skyward Sword. The site returned to becoming an all-encompassing website, with daily news, editorials, and media content being added, to supplement the game walkthroughs. The period launched Zelda Dungeon into becoming one of the Big 3 in the online Zelda community, alongside Zelda Universe and Zelda Informer, where there was fierce website competition over content. In the middle of 2011, there was litigation between Zelda Dungeon and its web-host, over the domain name ZeldaDungeon.net, and at one point the website was planning on moving to a new domain. The parties settled and Zelda Dungeon gained full autonomy over all aspects of its site in October of 2011.