From Zelda Dungeon Wiki
Jump to navigation Jump to search
Want an adless experience? Log in or Create an account.
Layout 2.0 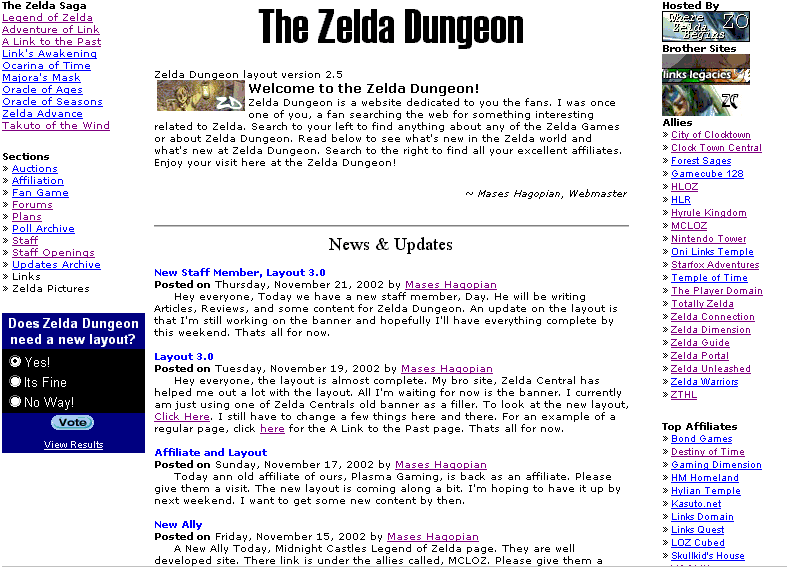 On March 27th, 2002, Zelda Dungeon launched Layout version 2.0, and it was the first layout that was built with html coding. The layout was built by Mofokuban, the Webmaster of City of Clocktown. With the introduction of HTML coding, the website now had a consistent appearance throughout all of the pages.

Two versions of this layout were actually released. Upon release, version 2.0 had a listing of all the Zelda games along the left navigation, and every specific page of content for each of the games was also listed, in an indented list. This worked well at the layouts launch, as there were so few content pages. However, the website began to grow and new pages were constantly being added to the site, which caused the left navigation to become very lengthy. Additionally, because site was using basic HTML, after every new page or affiliate was added to the front page, every single page of the website had to be individually edited.

Several months into the layouts existence, version 2.5 was launched. The noticeable difference was that the game menu on the left has been compacted so that it only listed the actual games. With version 2.5, the website began using shtml. This allowed the navigation bars to be adjusted without having to go through and edit every single page when a single link was changed, and this made editing the website a lot more efficient.

The site was growing rapidly during this layout, reaching over 50 hits a day and yahoo geocities was no longer large enough for Zelda Dungeon. At the end of each month, Zelda Dungeon was being taken offline due to overuse of the allowed bandwidth. After searching online for other free hosts that were more reliable, Mases stumbled upon a website known as Zelda Odyssey, which was part of the Chatville network. After contacting the webmaster of Zelda Odyssey, Zelda Dungeon was accepted for hosting, and moved to this new network.

During this era of the Zelda Community, there were 100's of active Zelda websites and link exchanges through affiliation was a regular way of gaining traffic. Zelda Dungeon became affiliates with over 50 Zelda and gaming websites, including some mid-level Zelda sites at the time, including Zelda Central and Link's Legacies. Through these affiliate link exchanges, traffic levels continued to grow to reaching nearly 100 hits per day.

During this time frame, Zelda Dungeon hired its first ever staff member, Steph. Steph originated from Link's Domain, a Zelda website which had just closed down. After seeing her work and seeing the closure of the Link's Domain, Mases contacted Steph and asked her to help out at the website, where she officially became a staff member on October 27th, 2002. Steph ended up creating much of the Adventure of Link content at the time, and had set a new quality standard of content for Zelda Dungeon. Steph was only at the website for a few months before leaving her position behind. Almost all of her content has since been replaced, but Steph still leaves behind a legacy of being the first volunteer staff member at Zelda Dungeon, as well as raising the bar for content.