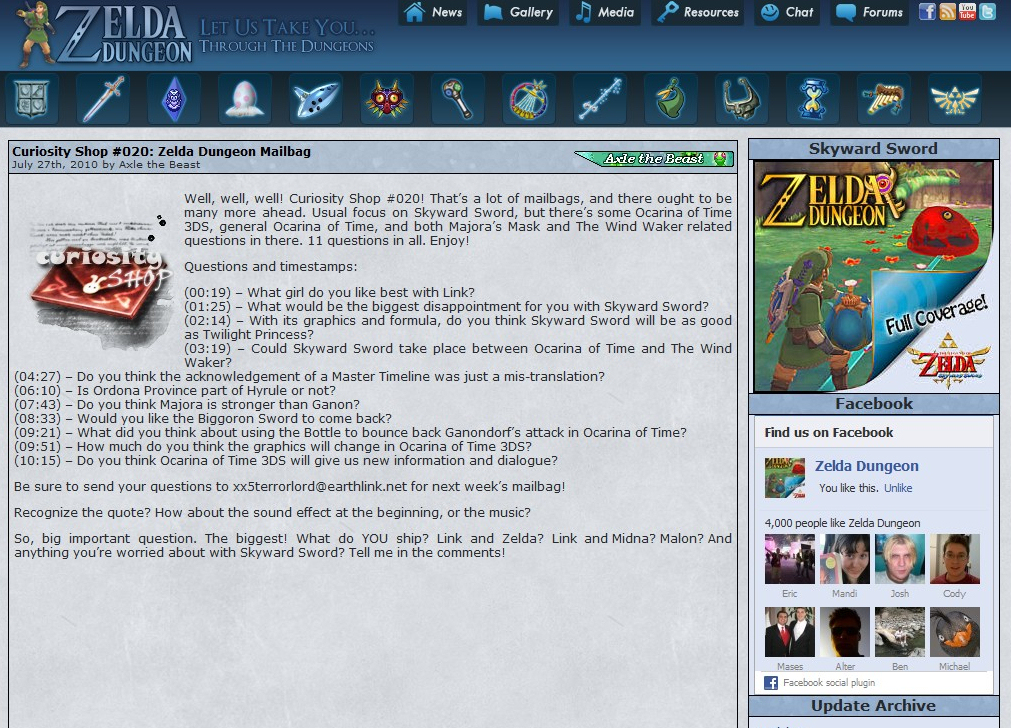 Launching just before E3 2010, the site immediately received quite a boost in visitors. With Skyward Sword being revealed, more visitors flooded in and the boost remained consistent throughout the summer and into the fall and winter.

After the previous several layouts were more visually intense, with large pieces of background imagery and official artwork, this layout took a significantly more simply approach. With a light color scheme and very little in terms of background images, this was a more limited design, with focus being on quickly loading speeds. With the header being very short in the height, it allowed viewers to see the latest content right away, without ever needing to scroll down.

New with the layout was the drop-down menus when the user hovered over the game icons. Unlike prior layouts, there was tiered hover system, where after the user hovered over certain categories with the game menus, new pop-out menus appeared with sub-links. This allowed for several hundred links to appear in the header, without massive game menus that took long to load.

During this time period, Zelda Dungeon reemphasized the importance of having daily updates, with at least one update occurring every single day from July 4th, 2010, all the way through February of 2011. While there was a lot of Skyward Sword news dripping out, there wasn't material each and every day. Instead, the site focused on new features to give consistency with updates. A weekly Fan Artwork showcase took place every Tuesday and the Curiosity Shop Mailbag had a set consistent release every Wednesday. Additionally the site started weekly Fan Music feature each Thursday, and weekly editorials published each Friday.

Other weekly features that came and went included the bi-weekly featured forum thread and a new collection series titled, Mas' Zelda Collection, in which Mases would showcase a particular item in his Zelda collection each week. The goal with many of these weekly features was that regardless of whether or not any news was taking place, there would almost always be a content post that day, always giving viewers something new to look.

The time period also marked the rapid expansion into the social media. While the Zelda Dungeon YouTube channel launched way back in early 2007, it took quite awhile for it to finally stand on its own. At its third year online, it reached 6,000 subscribers, but in its next calendar year it blossomed to over 13,000 subscribers. Similarly, the Facebook account, which had just over 2,000 likes at the launch of the layout, quickly blossomed to having over 8,000 likes by the end of 2010.

In late 2010, site also started Z-Talk, the Zelda Dungeon Podcast. This was Zelda Dungeon's first major attempt at running a more consistent audio podcast. Run by new staff members Din and Rishian, the monthly podcast featured Zelda discussion by the hosts, as well as roundtables, theories, special guests, and even podcast games. The monthly podcast usually popped up during the last week of each month, as well as occasional special editions of the podcast. Z-Talk ran for a total of 40 episodes, running all the way through December of 2013.

Website streams started to become more common at the website. There was a one-day Mini-Marathon on July 4th, lasting 12 hours and including playthroughs of the first four Zelda titles. To celebrate the site 9th birthday on August 19th, 2010, a full Wand of Gamelon stream was held. Later in the year there were full streams for Majora's Mask, Faces of Evil, and a New Years Day 12.5 hour stream of Zelda's Adventure.

Towards the end of the year, site began a featured games month, with October of 2010 having been a monthly feature dedicated to the 10th anniversary of Majora's Mask. During this period, there was daily updates about Majora's Mask, with opinion articles and editorials, updates to the Zelda Guides, a Majora's Mask themed mailbag, and media updates. This was the first of several featured months, where a new game was headlined for a full months period of time. Games were chosen due to their anniversaries, or in some cases right when the games were scheduled to be re-released on virtual console.

From 2009 through 2011, the Legend of Zelda online community had evolved quite a bit. Where there was once 100's of Legend of Zelda fan websites during the prior 10 years, with dozens of them gaining notoriety in the Zelda Community, that consolidated down to only a select few more traditional websites. Zelda Dungeon, alongside Zelda Universe and Zelda Informer became the Big 3 in the traditional Zelda community. During this period of time, there were some fierce competition between the websites, with there consistently being features, article topics, and other posts that were drawn from the other respective websites.

The competition between websites became very unhealthy at times, with Zelda Informer on a number of occasions making public call-outs of Zelda Dungeon, with acquisitions that there was lifting of article topics and news pieces directly from Zelda Informer. This created a rift among core viewers who regularly visited both websites, with many taking sides in the back and forth bickering. While unhealthy at times, the competition from both Zelda Universe and Zelda Informer really kept Zelda Dungeon on its toes, and pushed the site forward to new heights.

Towards mid-2011, there was conflict between Zelda Dungeon and its web-host at the time, Atomic Gamer. For years prior, Zelda Dungeon had received free web-hosting, in exchange for the site being required to have ad banners. While this relationship worked for years, with the sites growth, Zelda Dungeon was looking to capitalize on these numbers and monetize the website for its own gain. This created a conflict and Zelda Dungeon was attempting to move away from being hosted by Atmoic Gamer. There was some conflict over the ownership of the domain name ZeldaDungeon.net, which led to litigation between the two parties. At one point an alternative domain was purchased and plays were in motion to migrate the website to a new domain name. However, in Fall of 2011, the two parties reached a settlement agreement, where Mases was able to purchase the domain name, allowing Zelda Dungeon to have complete autonomy over all aspects of its website.