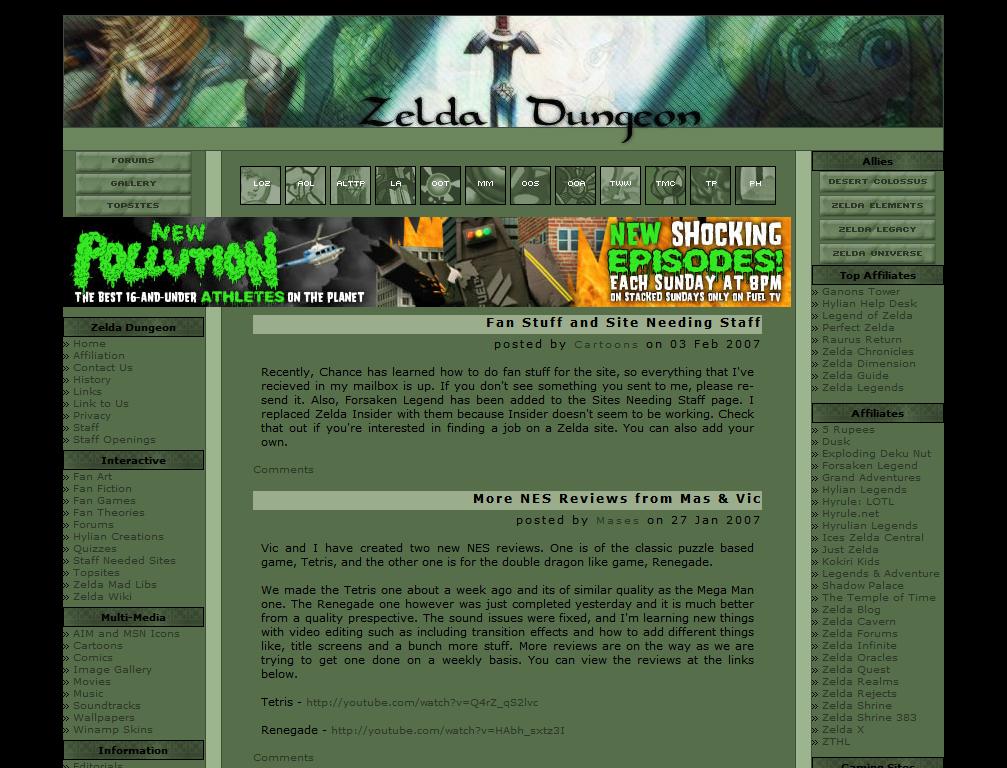 Layout 12.0 was launched on August 19th, 2006, corresponding with the websites 5th birthday. The layout returned to a greenish color, but it took on a much duller color scheme than anything that Zelda Dungeon previously had. It returned the layout to the traditional horizontal game menu at the top of the website. The layout was received with a mixed reaction from fans. Most users at the time did not overly like the layout, but much preferred it over the bright Layout 11.0.

During the first few months of this layouts lifespan, not too much was happening, with regular updates becoming fewer and further between. Longtime webmaster Cartoons was stepping away from the site, taking on a more backseat before fully removing himself from the website in February of 2007. This left Mases, for the first time in nearly five years, as the only active staff member of Zelda Dungeon.

On October 31st of 2006, Mases made an update at the website, stating that it was the end of Zelda Dungeon as everybody had come to know it. With the decline in viewership to a 3-year low, as well as a very inactive staff, Mases had grown unhappy with the direction of the website. Even on the eve of the release of Twilight Princess, Mases at the time believed that Zelda Dungeon could not continue to exist in its current form, and Mases was beginning looking elsewhere in the Zelda community to smaller Zelda websites to potentially bring into Zelda Dungeon fold and spark new life into the website.

In late October Mases approached the webmaster of a now closed website, Zelda Compendium. The website was fairly new, but already had a very high quality standard in content that even surpassed many of the outdated guides at Zelda Dungeon. Early plans were in place for a merger between Zelda Dungeon and Zelda Compendium, but plans never went through, as the webmaster of Zelda Compendium seemingly disappeared from the internet and his site was soon abandoned. Shortly after the release of Twilight Princess, Mases began working towards merging Zelda Dungeon with another fairly large Zelda site at the time, Zelda Legacy. After several weeks of progress, things fell through and the potential merger opportunity was gone.

With two consecutive failed attempts at mergers, even with the release of Twilight Princess, Zelda Dungeon had truly hit rock bottom. Site visitors did receive a short jump with the release of Twilight Princess, but moral at the website was at an all time low. December of 2006 marked the first time since 2001 that a span of over three weeks occurred without a single update.

In February of 2007, Mases released what he dubbed as the 'State of the Dungeon address'. It was the first video based update where Mases spoke candidly about the failed mergers with Zelda Compendium, Zelda Legacy, and a broad overview of what had happened in the previous few months. Mases also gave a brief idea of plans that he had for the future of the website, including a much bigger emphasis on the inclusion of more video content. While the update itself was not of great importance, it did mark the first video piece of content produced and published on the website.

The update sparked interest from the Webmasters of LegendOfZelda.com. They too were looking for websites to potentially merge with and talks began just days after the update was made. The idea of having a Zelda website under the domain name, legendofzelda.com, was very intriguing to Mases. Plans were in place of labeling the forums of this new website as the Zelda Dungeon, while retaining the LegendOfZelda.com site name.

LoZ.com was a site primarily focused on media, news reporting, and a massive community forum. While Zelda Dungeon was focused on content and game strategy guides, making each sites weakness the other websites strength. At the original planning of the merger, the new merged site would be commenced with a brand new layout, signifying this big moment in history.

After just a few days of talks, the webmasters of LoZ.com wanted to get the merger done quickly, while sorting through issues in the future as they occured. Mases agreed to these terms and a site merger had commenced. The ideas of a massive launching of this new combined website fell through. There was no new layout, and the merger took place with just news posts at both LegendOfZelda.com and Zelda Dungeon.

Very soon after the posts went live, Mases made abrupt decision to turn away from the merger. He immediately regretted the decision, as he realized everything was happening at a very rushed rate. Mases would delete the video update at Zelda Dungeon, as well as deleting all the related announcement posts at LoZ.com, and even deleted his State of the Dungeon video update. It was as if the last few hours of the website had never happened, and Mases had pulled back on his offer of a merger. Mases believed that he rushed into the merger, and that rather than it appearing as a true merger of sites, it seemed more so that Mases was just joining LoZ.com as a new Webmaster. After hearing the news, the relationship between the websites took a sour turn, and talks of the merger had died out.