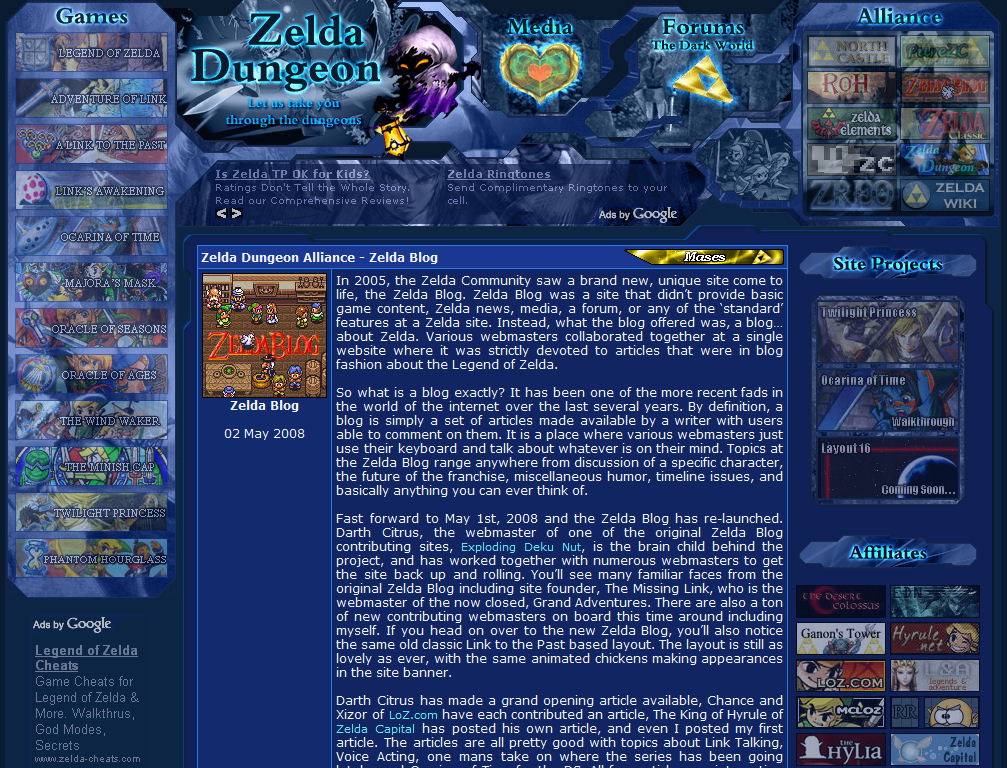 Prior to the launch of this layout, a notable shift in the website's direction occurred. At the time, Zelda Dungeon was looking to focus more exclusively on game guides and walkthroughs, rather than trying to be an all-encompassing Zelda website. For years there had been some outdated sections of the website, focused on fan contributions, fan interaction, or general non-game guide content. As these were never a clear focus of the website, they often were overlooked and outdated, with other websites around the internet that specialized doing a significantly better job. This started the Zelda Dungeon Alliance, where the website was going to remove all non-game guide sections, and instead, regularly promote the work of other websites outside of Zelda Dungeon who had a specific focus on certain sectors of the Zelda community.

Notable websites in the alliance included the following.

On May 18th of 2008, Layout 16, which was created by Caleb, was launched, and the alliance websites were now being fully implemented.

With the inclusion of the alliance, the website navigation was simplified, with all content removed, other than the game listing, as well as links to the media. Additionally, this started a new tradition that when the user would hover over the game menu, a massive pop down navigation would appear, showcasing all the important links to guides for that particular game. This made is very easy to quickly get to individual guide pages without having to navigate through multiple pages.

This layout also saw the removal of the classic two-navigation bar display. While the front page still had a listing of site projects and affliates on the right navigation, this menu bar was removed on all subsequent pages, which allowed for a more expansive content area. This extra real estate allowed the game guides to take advantage of a much wider display. This extra space of content allowed the staff members of Zelda Dungeon a wider area to work with and this ultimately led to higher quality guides because there was more room. Much larger thumbnail images were used and it gave a feel of a magazine spread, where the guides came to life, with game models and artwork wrapping around the content.

The layout also saw the release of a new slogan for Zelda Dungeon, 'Let us take you through the dungeons'. This signified the extra stress the website had on game content and specifically, game walkthroughs. Content continued to pour in during this time period, with the Ocarina of Time walkthrough and Twilight Princess walkthroughs becoming the new standard bearer of the quality of content.

Prior to the launch of layout, Caleb had been working on another layout that had a black and red color scheme. This layout was never officially released, although it did have the same functioning mechanics as the final blue variation. The red variation of the layout was very image intensive, taking a long while to load, and it was decided that this was not practical. The blue variation also had quite a bit of imagery, but it was significantly smaller in file size.

On August 19th, 2008 Zelda Dungeon celebrated its seventh birthday and released a retro version of layout 1.0. Caleb created a mimic of layout 1.0 in a short period of time, and for several hours, it was available for viewing at the Zelda Dungeon index page.

There were a handful of other staff changes during this layouts era, including the hiring of Josh Zelinsky, who was the lead content specialist at a now debunked Zelda website, Zelda Oracles. After seeing his work at what was an inactive website, Mases approached Josh and offered him a chance to help out at Zelda Dungeon, at which Josh quickly jumped aboard and began working on various content projects, including the Wind Waker Walkthrough. Josh would become an instrumental member of the team, helping crafting and maintaining Zelda guides for over the next 10+ years.

The website saw fairly stable traffic during this period, with daily numbers averaging between 2,500 and 4,000 unique visitors per day. The peak day came on August 5th, where the site had recorded 4,048 unique visitors.